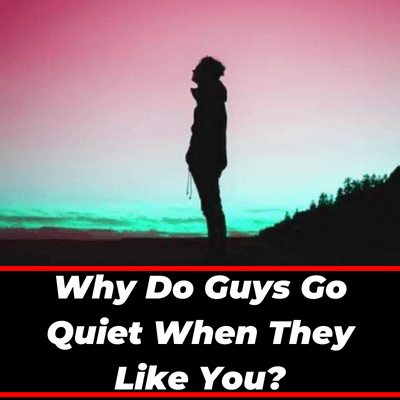 Don’t get stressed sister because through this post I am going to share 15 reasons why a guy goes quiet when he likes you…….👍✌️

So, without wasting a single second, let’s start this post…..⤵️⤵️

Yes, if a guy becomes silent even though he likes you then there is a very high possibility that he thinks that you don’t like him and this is stopping him from being normal with you…..🌺

Solution: Go and tell him that you really like him, everything will be okay then..💕

This can be one of the biggest reason why he is not able to talk to you much……..💔

He thinks that you don’t like his boring talk, he can’t impress you by talking to you, he talks meaningless things that make you get bored of him….💔

Solution: You can tell him that you really like talking to him, you appreciate him when he talks about his life to you, & you like it when he expresses himself to you….💕

Tell him you want to talk a lot with him, you really like it when he starts a conversation…

I am sure then he will behave very friendly and lovingly with you….💞

A shy guy will always be quiet around the girl he likes, so if he becomes silent around you or when you both are alone it means he’s shy of you and his shyness is stopping him from behaving normally with you….💔

If you want to check whether he’s shy of you or not then here’s a confirmation trick….⤵️

If he can’t see you into your eyes while talking to you then it means he’s is really shy of you and loves you as well.❣️

Solution: Just start talking to him frequently and try to make your friendship with him more stronger, after that he won’t be shy of you…🌺

4. He Thinks You Are Out of His League💔

If you are the most beautiful girl in the class and he likes you then he can easily be silent around you….🌺

Because he thinks that you are so much beautiful and you will never like a normal guy like him…..💔

So, these kind of thoughts are continuously demotivating him, making him sad and silent….🙏

I am sure then he will also confess his feelings to you….

5. He Fears That You Will Break Friendship With Him💔

Maybe he thinks that you just see him as a friend and you talk to him just because he is your friend and if he tells you that he likes you & has become yours then you will break friendship with him and you’ll never talk to him….💔

So, because of fear of losing your friendship he is becoming quiet and hiding his love from you…..🙏

Solution: Go and tell him that he is your best friend and you love him too, even you can tell him that you want to know what he feels about you, hope he will tell you…..🌺

Yes, he might be scared of you especially if he’s a shy guy, his heart starts to beat fast when he sees u and talks to you and this is natural with a shy guy….🌺

Don’t think that you are scary, no you are not, he is afraid of you because you are the girl he loves….🙏

Solution: Well you are a girl so I don’t need to tell you much that how to remove his fear of you, you can start sitting with him, show him that you are attracted to him, go out and spend sometime with him….💕

7. He’s Hoping To God That You Make The First Move💕

Solution: Make the first move and propose him to marry you, yes nothing is wrong in it, a girl can also propose a guy, so go for it but first make sure that he likes you…🌺💕🌺 All the best:)

8. You Are Not Showing Him That You Like Him💞

Yes, if you are not showing him any signs that you like him then also he can become quiet even if he likes you…..💔

Solution: Show him that you like him, for example, you can flirt with him, sit beside him in the class, compliment him, etc..😍

Maybe he likes you but he thinks that he is not rich and if you like him back, and if you get married to him then he won’t be able to give you the life you’ve dreamed of…💔

He really loves you but because of this reason he is distancing himself from you so that you can start hating him and forget him for forever…..😭💔

Solution: Go and tell him that you don’t require any money, you just require his lv to live happily with him…..🌺💕🌺

Solution: If he is busy and he is not able to contact you due to hectic life then first advise him that he can text you as it takes just few seconds to compose and send a text…..🌺

If he continues to ignore you then leave him because no one is too busy to text or call you, it seems like he doesn’t really love you….🙏🙏

Maybe you are too much beautiful but he is not as beautiful as you are and this is discouraging him making to become completely silent….💔

Solution: Tell him that he is really pretty and handsome, and you like him so much, I am sure he’ll behave nicely then….🌺

12. He Thinks He Will Say Something Wrong💔

So, he is keeping his mouth close because he feels that if he speaks then he might say something wrong to you which may have a bad impression on you about him….💔

Solution: Tell him that you like when he talks to you and you like his voice, even you can tell that you wanna hear his voice all the time….😍

I am sure after that everything will be fine….

13. You Never Compliment Him💔

When you often compliment a guy then it really makes him feel loved, he feels like you really love him…..🌺💕🌺

And then he starts to become silent and sad…..💔

As per me, if a guy really likes you then he won’t get quiet unless he is a shy guy…..🙏🌺

So, first make sure whether he likes you or not because it can also be possible that he considers you only his friend, nothing more than this!!

So, first try to find out what he feels about you….🙏

15. Only He Knows The Exact Reason🙏

Well, I have share many reasons with you that why he is quiet even if he likes you but there is a possibility that none of these reasons are behind his silence……….🙏🌺

Maybe there is any other reason which is forcing him to be quiet, so please try to ask him when you find him alone….🌺

You can say “why you are so silent if you like me, why don’t you tell me that you love me?”💕

Hope after hearing this from you, he will reveal that reason….🙏🌺

That’s it for this post, hope you liked my post and I was able to give you a clear direction that what you need to do next…..🙏