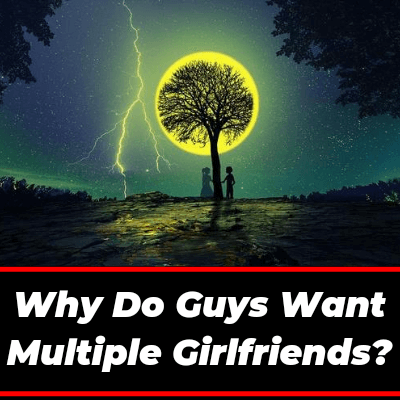 Imp: I have written this post to make every girl aware of bad guys, so if u have time then please try to read every point of this post and also share this post with your friends so that more & more girls can be aware of bad guys who are cheaters….🙏💝

Yes sister tell me, do you think that all guys want multiple GFs?

If your answer is Yes then you are wrong here sister because we all guys don’t want multiple girlfriends…..🙏

Only black hearted guys want multiple GFs, so please don’t believe that we all guys want a bunch of girlfriends around us……🌺🙏🌺

2. There is No Genuine Guy Around You💔

If you are asking on Google that why guys want multiple girlfriends then I am sure that there is no genuine guy around you or if someone is there then you are not able to find that diamond guy…..🙏

So what are you waiting for? Just go and find out that genuine guy who is around you…..🌺

If you don’t know how to find a genuine guy then you can contact me through “contact us” page⬇️, I will try to reply you back asap…..👍🙏

3. A Real Guy Would Never Do That🙏

Yes dear, the guys you are talking about are not real guys, they are just fake guys……!!!!

Because a real guy or man never makes more than one GF, he makes only one girlfriend in his life, truly loves her, have his eyes only on her, he never thinks about other girls, he marries only her and give her all the happiness of this world….

But when it comes to fake guys they just keep on making new girlfriends everyday and every week…..🙏💔

I also love a girl, she is my first and last girlfriend, I don’t even look at other girls no matter how beautiful a girl is and I have also proposed my GF last Sunday, soon we are marrying eachother…..🌺💞

Trust me, no girl is on my mind other than her, so, now tell me, am I not different from the guys you are talking about? Yes, I am….🌺

So, don’t run after those fake guys, find a guy like me or more better than me, who genuinely loves you and who really wants you to be his wife and be with you for the rest of his life…….🌺💕🌺

4. Because They Are Cheaters!!

They just move from one girl to another for their benefits and fun…..😡

And God is very kind to them because many of these guys have attractive looks but black hearts…..💔

Being a genuine guy, I will advise you to stay away from these type of fake guys…….🙏🙏

5. Because Love is Just A Joke For Them💔🙏

Guys who want multiple girlfriends never love a girl instead they just cheat her by pretending that they really love her…..

And behind her back, they have multiple girlfriends and like this, by saying ‘I really love you’ to every girl they cheat all the girls who are their GFs….💔🙏

And love is just a joke for them!!

6. Because They Don’t Understand The Feelings of A Girl 🙏💔

Guys who want multiple girlfriends never understand the feelings of a girl, they just see them as a toy…..💔

These type of guys don’t even care how bad a girl feels when she finds out that the guy she is with have multiple girlfriends, these guys also don’t feel bad even after this…..!!🙏😡

They don’t even regret that they are cheating a mother’s daughter who is everything for her mother…..🙏😭💔

Guys who want multiple girlfriends are bad guys and I don’t ever call them men!!

Because a real man love only one girl & once in a life, he never cheats a girl🙏

8. Because These Type of Guys Are Players🙏

They know very well that how to make girls fall in love with them by telling one lie after another and then deceive them….💔

9. Because They Know How To Easily Impress A Girl!!

Shy guys like me don’t know these type of techniques and even if we do know, we shy guys don’t make multiple GFs, we just make one GF and be of her for our entire life….🌺💕🌺

10. These Are The Guys Your Mom Warns You Not To Be Friends With🌺

Do you remember, your mom warns or advise you not to be friends with bad guys?😎

Guys who want multiple GFs or already have more than one GF are the same guys your mom warns you not to be friends with…..🙏🙏

11. Because They Don’t Have A Kind & Pious Heart

You will not believe me but this is a reality that shy guys never cheat a girl because they’ve a kind and pious heart that can never allow them to cheat on a girl, even don’t let them thinking about cheating a girl…..🙏💕💝

And guys who want or have multiple GFs don’t have a kind and pious heart & that’s why they want multiple girlfriends…..🙏💔

12. Because They Want To Showoff💔

Yes, some guys try to show themselves bigger than other guys by making multiple girlfriends, they think that having multiple GFs will make them famous in their school or college….!!

So, showoff can be a reason why guys want multiple GFs and I always advise girls to not have a friendship with these type of guys….!!🙏💔

13. Because Most Girls Don’t Try To Investigate About A Guy’s Past & Present!!

Guys who want to have multiple girlfriends know very well that most of the girls will be attracted toward them just by looking at their attractive looks,

And they won’t ask or try to examine abt their past and present, and they will easily be their girlfriend…!!

And yes, this is the reality, almost all girls don’t try to investigate about a guy’s past and present before becoming a guy’s GF…..😭

And this is their biggest mistake because if they investigate about a guy’s past or present then they can easily find out whether he already has a girlfriend in the past or the present, or not…..🌺👍

And then they can easily protect themselves by not getting cheated by a bad guy…..🙏👍

Yes dear, you don’t need a guy who had a girlfriend in past or he has already a GF in present…..🚫

Still reading? Try to find that guy that I am talking about…..🌺💕🌺👍😎

15. Stay Away From These Type of Guys

I have already explained above that guys who have or want to have multiple girlfriends are cheaters & they are bad guys who are not good for a girl…..👍🙏

So, I would advise you to stay away from these type of guys because they are not good for you and your future, even you should not be friends with such guys………🙏🙏

In 14th⬆️ point I have explained what kind of guy is best for you so try to read that again…..✌️😎

This is the end of this post, hope you liked my post and I was able to clear all your doubts from your mind….👍✌️🌺