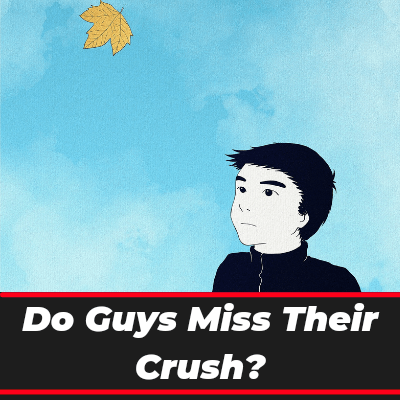 Without wasting your time the real answer is ” Yes, guys miss their crush a lot when they can’t see their crush & believe me, it is a very painful situation for all the boys and sometimes this can make them sad as well. “💔

Here you will get to know when and in which moments a boy misses his crush and then what does he do?….

Table of Contents show
Moments or Places Where A Guy Misses His Crush
1. In Her Absence
2. At Home
3. On Holidays
4. When He Sees Other Couples
5. When His Crush Doesn’t Talk With Him
6. When A Guy Hasn’t Met His Crush From A Long Time
7. During Free Time
8. Everytime
What A Guy Do When He Misses His Crush💕
1. Pray To God🙏
2. Check His Crush’s Social Media Profile
3. See Her Photo💕
4. Driving Car By Her House
5. Going To Places Where She or Her Family Mostly Spend Their Time🤠
6. Trying To Get Her Number💕
7. Talk With His Crush
8. Listen to Songs
9. Chant Her Name
10. Some Guys Can Start Working Hard
11. Complain To God
12. Make A Plan or Roadmap To Make Her His Life Partner
13. Sleep in a Hope That One Day She Will Come in His Life

Moments or Places Where A Guy Misses His Crush

Here are the places and moments when a guy starts missing his crush and becomes emotionally unavailable at that moment:

When a guy sees his crush in classroom or anywhere else then it makes him happy and so relaxed, and as he has started to love her so his body gets accustomed to see her, talk with her and spend all the time with her.💕

But when she is unavailable or absent on a particular day, then he starts to miss her and loses interest in what is happening around him.

Home is the place where every guy misses his crush and the probable reason behind this is the absence of his love with him.

So believe me, a boy will miss his crush at home, no matter he is rich or poor or have everything to spend time at home.💔

Be it an office going boy or a school going boy, almost everyone loves holidays and they always look forward to Sundays so that they can enjoy outside at beaches or any where else.

But holidays are the most painful days for a guy who has a crush on a girl, because on holidays he won’t be able to see his love and will start to miss her.

If schools or offices get open on holidays then also this kind of guy will come happily.🤠

4. When He Sees Other Couples

When a guy having crush on a girl sees other couples outside enjoying food or any moment then he starts missing his crush because like those other couples he also wants to eat and play with her and since she is not with him, he starts thinking about her.💔

5. When His Crush Doesn’t Talk With Him

If a guy’s crush stops talking with him then also he can start missing his crush because his body has made a habit of talking to her and now she is not talking to him then his body doesn’t feel good and he may start becoming sad too.💔

6. When A Guy Hasn’t Met His Crush From A Long Time

Many times this happens that when you need to shift from your current city or you have to change your high school like this if a guy or his crush leaves her current location and he hasn’t seen her in a long time so it’s very likely that he’ll start to miss her….💔

When a guy is free then also he can miss his crush because in the absence of any physical exertion his heart will force the mind to think again and again about her and then when he won’t be able to find his crush near him, he will start missing her straight away.💔

The conclusion of all points is that a boy who truly loves his crush will miss her every time she’s not with him…. He will find himself alone in a crowd or in a hall full of people.

In other words, she becomes his need and trust me it’s very painful for a boy when his crush is not in front or near to him.💔

What A Guy Do When He Misses His Crush💕

Well, as a guy i can say that a guy does a lot of things when he misses his crush, from serious things to some really innocent activities & these are as follows:

This is the most common thing a boy does in the absence of his crush. He starts checking her profile on various social media platforms most commonly Instagram and Facebook.

Most probably, a guy checks his crush’s profile picture (even he can take a screenshot ❤️), her recent post, etc. So that he can get a glimpse of her face and her recent activity.

It is very obvious that when he can’t be able to find his crush with him then he will see the photo of his crush from the gallery of the phone.

Atleast by seeing her photo he can spend his time very easily because this is what his body, heart, mind, and he himself needs.❤️

4. Driving Car By Her House

A guy will drive his car by his crush’s house if he is not able to spend his time without seeing her face and the purpose of driving car by her house is that he can impress her with his car and he can also catch a glimpse of moon (his crush).💕

Also Read: Why your boy friend drive his car by your house?

5. Going To Places Where She or Her Family Mostly Spend Their Time🤠

On weekends, a guy missing his crush will try to go to the places where he is sure that he can see her face and these places can be amusement parks, restaurants, nature park, etc.

Don’t get shocked because a boy do many other interesting things which are neatly written below.🙏

6. Trying To Get Her Number💕

If this guy doesn’t have his crush’s number, he will try hard to get his number by contacting his crush’s best friends or his own friends who can help him get her number.

7. Talk With His Crush

If he has his crush’s number then he will try to talk with her so that he can feel good.

Yes, this is also very common among guys. They mostly try to hear song by using earphones when they miss their crush.

If you are wondering that which type of song a guy hear when he miss his crush then my answer is mostly romantic songs.

To enjoy the pain of missing crush and a guy can start chanting his crush’s name or imagine her face, her smile in his mind, in other words he makes a imaginary world where he can see and talk with his crush.🌺

10. Some Guys Can Start Working Hard

Yes, you read that right, some serious guys can start working in their city, so that they can make money and can easily impress their crush.

Emotional & pious hearted guy will complain to God while lying on bed at night that “God, what is my mistake? Why you aren’t making my crush mine? How many days I will live without her, please bring her in my life, she has become my need……..”

12. Make A Plan or Roadmap To Make Her His Life Partner

Yes, if a guy genuinely love his crush then he will work on making a roadmap in which he will plan that how he will make consistent money and then make his crush his wife or life partner.

There is no guarantee that he will be successful in his plan but atleast he is trying, which is far better than doing nothing.

13. Sleep in a Hope That One Day She Will Come in His Life

This is the last thing a guy do when he misses his crush, he will sleep in a hope that one day she will come in his life and the night goes on…….

So, that’s it for this post friends, hope you liked it and you will share it with your friends…. 🌺🙏