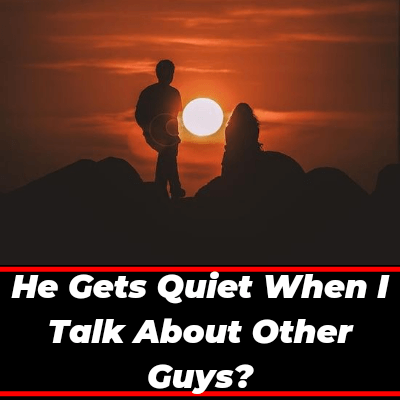 Don’t get worried sis, because through this post I am going to share exact reasons why a guy gets quiet when you talk about other guys…..

So without wasting a single second, let’s get started……..⤵️⤵️

Table of Contents show
1. He Definitely Loves You But Afraid To Make A Move💕
2. He Has Feelings About You❣️
3. He is Feeling Sad From Inside💔
4. Silence Hides Many Things🙏
5. It’s Not Jealousy All The Time🙏
6. He Has A Fear of Losing You💔
7. Would You Be Happy If You Were At His Place?💔
8. Please Avoid Talking About Other Guys Next Time🙏
9. He is Shy & Can Never Hurt You😍
10. You Must Try To Ask Him🙏

1. He Definitely Loves You But Afraid To Make A Move💕

I am also a guy and if a guy gets quiet when you talk about other guys then trust me he really loves you and you can’t deny it…..🌺💕🌺

If you doubt whether he likes you or not? Then tell me, why he went silent, why didn’t he spoke a word about those guys?

His silence proves that he definitely likes you from the bottom of his heart but he is afraid to make a move.💕💔

2. He Has Feelings About You❣️

When you talk about other guys in front of a guy who doesn’t have any feelings for you, he’ll talk about them with you.

But if you are talking about other guys in front of a guy who likes you and has a feeling of love for you then trust me, he will get quiet……🌺💕🌺

I have self experienced this when the girl I really loved started talking with me about other guys, I was feeling so sad from inside and I also didn’t spoke a word at that time……💔

I don’t know she loved me or not but I genuinely loved her, even after seven years of without seeing her, only she is in my mind because no other girl can take place of her……One day I will meet her💔💕

3. He is Feeling Sad From Inside💔

While talking to a guy about other guys, if you see that he is getting a little sad and silent, believe me, girl, everything you said about those guys pierced his heart.💔

Maybe he was thinking that “I really love you but what are you talking about, why you are talking about other guys, why don’t you talk about US?”💞

Yes, silence hides many things and I am sure you will agree with me.🙏

If a guy gets quiet when you talk about other guys then it means he is hiding many things behind his silence.

If you like this guy and he is showing some other signs of attraction like he frequently looks at you when you aren’t looking, he speaks softly with you, or he gets shy around you, then you should approach him.💞

I am sure he will confess that he likes you but for this, you need to first tell him that you also like him.💕🙏👍

If you don’t like this guy then don’t think much about him, just simply ignore….👍👍

5. It’s Not Jealousy All The Time🙏

Many say that if a guy gets quiet when you talk about other guys it means he is getting jealous about them.

But according to me, it always doesn’t mean jealousy because if the guys you are talking about are friends of him then he won’t get jealous about them, maybe he is getting quiet because of some other reasons…..

So, his silence doesn’t mean he’s jealous of the guys you’re talking about to him……🙏🙏

A guy gets quiet when you talk about other guys it means he is afraid of losing you.💔

By being silent, he is thinking that someone else will take you away from him and as a result he has no words to talk !!

7. Would You Be Happy If You Were At His Place?💔

Yes, tell me, would you be happy if a guy whom you really love talks about other girls?

I know you wouldn’t be happy and you would went silent like the same guy you are talking about…..

In the same way, I am sure he loves you and that’s why he is getting silent when you talk about other guys……👍👍

8. Please Avoid Talking About Other Guys Next Time🙏

If you have feelings about him then next time please avoid talking to him about other guys so that he doesn’t feel demotivated or sad about losing you.🙏

If you don’t have feelings about him then also please avoid talking about other guys with him, so that he doesn’t gets quiet next time.😎🙏👍

I am also a shy guy but I am shy only in front of the girl I love and trust me, a shy guy can never talk much to a girl he loves……🌺

So, when a guy get quiet when you talk about other guys it means he is getting shy and due to this, he is not able to speak a word, even not about what he has in his heart about you….💗

Now, you will say how I know he won’t hurt you?

So my answer is because his love for you is pious, he didn’t say a word to you when you gave him too much pain by talking about other guys and it means he can bear any pain for you but can’t hurt you…..🙏🌺💕🌺

If you like him and wants to know whether he likes you or not then next time when he gets silent when you talk about other guys then just ask him by looking into his eyes “Why are you not speaking a single word, do you like me?”

So, this was my post, hope I was able to clear all the doubts about that guy.

But if you still not sure what to do then you can contact me through “contact us” page, I will try to reply you back as soon as possible…….

Will see you in next post, till that take care and stay ahead……