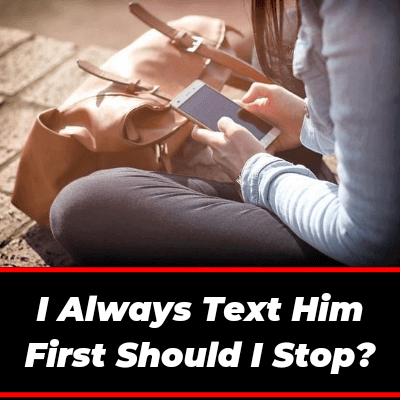 So, without further delay, let’s start this post…….⤵️⤵️

Table of Contents show
1. You Should Completely Stop Texting Him!!
2. You Have Already Shown Him That You Are Interested🌺
3. He’s Not Into You💔
4. He Wants You To Chase Him🌺
5. It Doesn’t Matters If He Always Replies To Your Texts!!
6. He Seems Rude To Me!!
7. He’s Not Making Any Effort🌺
So, What You Can Do?

1. You Should Completely Stop Texting Him!!

2. You Have Already Shown Him That You Are Interested🌺

I am a shy guy and if a girl texts me first all the time like she is texting me good morning and good night almost everyday then I can understand in a second that she is interested in me (hope you are texting him good morning & goodnight too)…..🌺

So, doesn’t the guy you are talking about aware that you are interested in him?

And as he’s aware that you are interested in him that’s why he is showing you tantrums….

And as per me, you should stop texting him…..🙏

I am a guy and trust me, if a guy is genuinely into you then you don’t need to text him first, you are going to get good morning and good night texts from him everyday….❣️

Does the guy you are talking about text you good morning and good night?

Better to leave him and find a genuine guy who texts you first not you need to text him first…..🌺

Yes, when you always texts a guy first and he never initiates a text first then it means that he wants you to chase him….🌺

If you want to chase him then happily continue texting him but if you don’t then stop texting him…..

5. It Doesn’t Matters If He Always Replies To Your Texts!!

Many blogs will tell you that if a guy never texts you first but always replies it means somewhere he likes you but it’s totally wrong…. !!

I also reply to everyone who texts me, so, does this mean I like them? No, I don’t….

But the guy you are talking about is doing the opposite i.e neither he is texting you first nor he is showing you through any way that he likes you…..

If you are texting him and he is not initiating any text first then he seems really rude to me, it shows that he doesn’t care about your texts…..🌺

Rude guys never care about a girl’s emotions and they never respect a girl…..

If you like a rude guy then happily keep messaging him otherwise just leave him….👍🌺

7. He’s Not Making Any Effort🌺

If he’s not texting you first, it means he’s not making any effort to impress you or win your heart……🌺

And if a guy is not making any effort it means he doesn’t like you…..

It’s a sad reality but it’s the reality that he doesn’t like you….🌺

So, What You Can Do?

Well, i always share nice tricks which mostly work because I share them based on my personal experience….

As per me, you can completely stop texting him…..🌺

If he likes you then he will ask you, is everything fine on your side or are you okay?

Then he can ask you that are you angry with him?

That’s it for this post, hope you liked my post and I was able to clear all your doubts him…..👍🌺