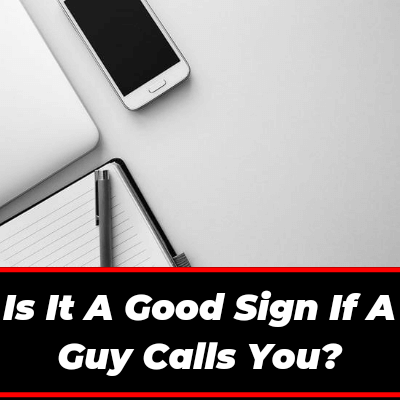 So, you like a guy and he called you over the phone and now, you aren’t sure whether it’s a good sign or not if a guy calls you….🌺

Don’t worry sis because through this post I am going to tell you the exact answer whether is it a good sign or not if a guy calls you…..

Table of Contents show
1. Yes, It’s Really A Good Sign🌺
2. It Shows That He is Really Interested in You❣️
3. A Guy’s Reality😎
4. It Means He Was Thinking About You🌺
5. Consider How He Talked To You Over The Phone🌺
6. What You Can Do?

I am also a guy and trust me, if a guy calls you then it’s really a good sign…..🌺

2. It Shows That He is Really Interested in You❣️

Yes, if a guy calls you then it means he is really interested in you…..❣️

If he wasn’t interested in you then he would never have called you over the phone…..

He’s interested in you that’s why he called you…..👍🌺

You don’t know but let me tell you that it’s very hard for a guy to call a girl, he thinks many times before calling a girl and believe me, a guy doesn’t call a girl if he doesn’t like her…😎🌺

He called you it simply means he likes you…..❣️

4. It Means He Was Thinking About You🌺

As i said in the previous point that a guy thinks multiple time before calling a girl especially if he’s calling the girl he loves.🌺

So, he also thought multiple times before calling you and it also means that he was thinking about you when he went home…

So, you need to understand that he was thinking about you and trust me, a guy only thinks about the girl he likes, so maybe he likes you…..🌺❣️🌺

5. Consider How He Talked To You Over The Phone🌺

To know whether he’s into you or not, you can try to recall how he talked to you over the phone….🌺

If his voice was so soft, he was giving you so much respect, he was feeling nervous, he had nothing to talk after talking 20-30 seconds like he got silent for a few seconds, his voice was cracking too then it means he’s into you….🌺

So, try to recall how exactly he talked to you…..

Well, by calling you over the phone he has made a move and now it’s your turn to make a move so that he can also know that you like him too….👍🌺

So, what you can do?

First call him today around 8-9pm and ask how his day was, what he’s doing, etc….

Then call him again tomorrow and after talking for about 20-30 seconds tell him that you are free this Sunday and if he’s free too, you both can hangout in your city…..🌺

And that’s it for today’s post, hope you liked my post and I was able to clear all your doubts about him…..👍🌺