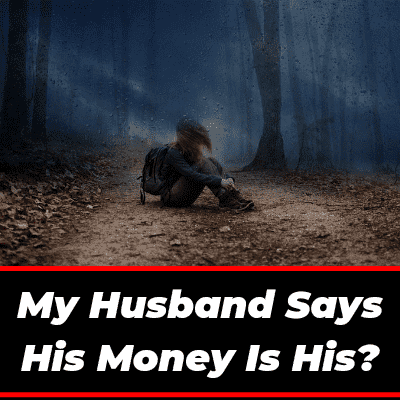 Some men pretend that they are genuine men but after getting married they start showing their real face….🙏💔

If your husband said you that his money is his and you don’t know why he said this to you then this post is for you…..

Because through this post, I am going to share what it means when your husband says his money is his and what you need to do next……👍🌺

Table of Contents show
1. There’s Nothing Left Now💔
2. Why He Married You, If His Money is His?
3. A Real Man Would Have Never Said This To You🙏
4. It Means Money is More Important To Your Husband Than You!!
5. It Means He Never Considered You As His Wife💔
6. Your Husband Has Shown You His Real Face💔
7. He’s Saying You Need Him, He Doesn’t Need You💔
8. This Shows That He’s A Narrow Minded Person🙏
9. It Shows That He Doesn’t Respect You💔
10. Tomorrow, He’s Going To Say His House is His, His Car is His, His Things Are His…….!!
11. Does He Yells At You On Small Things?
12. Does He Give Importance To You?
13. You Don’t Need A Husband Like Him🌺
14. Leaving Him & Giving Him Divorce is The Last Option🙏

Do you think, there’s anything left in your married life?

No dear, nothing is left now….

By saying that his money is his, your husband has told you the worst thing a husband can say to his wife…..💔

But your husband did exactly the opposite i.e instead of saying “Dear, my all money is yours” he said “my money is mine, not yours!!”…..💔

And it hurts me a lot that a woman has to hear this from her husband!!😭😭

3. A Real Man Would Have Never Said This To You🙏

If your husband was a real man and he genuinely loved you as his wife then he would have never said to you that his money is his…….🙏💔

If I have a wife in future, my wife will have equal rights on my money as I have and I will give her my entire money if she wants because she is my wife, money will not be more important to me than my wife…………….🌺💕🌺

4. It Means Money is More Important To Your Husband Than You!!

By saying that his money is his, your husband has made it clear that money is more important to him than you, he loves money not you…..💔

And this shows you are not with the right man, you deserve a better man than him………….🙏

5. It Means He Never Considered You As His Wife💔

Yes, your husband never considered you as his wife because if he considered then he would have never told you that his money is his…..💔

Instead, he would have told you that my money is not only mine but yours too, you can buy anything from my money and you don’t have to take permission from me to buy anything because you are my wife, but in reality, he never said this to you!!

6. Your Husband Has Shown You His Real Face💔

Maybe you used to believe that your husband is the best husband in this world and he genuinely loves you….💔

But dear, by saying you his money is his, your husband has shown you his real face that he’s is a bad man!!

When your husband says you that his money is his then it means he’s saying that you need him, he doesn’t need you…………💔

He thinks that you need him for money, a house, good life, etc.

If you need him just for money and good life then keep listening to these things from him otherwise it’s time to leave him forever…..👍👍

8. This Shows That He’s A Narrow Minded Person🙏

When a man says his wife that his money is his then it shows that he is a narrow-minded person….🙏

And your husband is also a narrow-minded person, you made a mistake while judging him and now, you are suffering because of that mistake…..💔

9. It Shows That He Doesn’t Respect You💔

But when a husband tells his wife that his money is his then it shows that neither he respects his wife nor he loves her….

So, if your husband said you that his money is his, it means he doesn’t respect you and he doesn’t love you too….💔

By saying his money is his, your husband has proved that when you ask him for something then he won’t hesitate to tell you that his house is his, his car is his, his things are his, etc…….!!

If you want to hear all these things then happily stay with him but if not then you can start a new life by leaving him….:))🌺

Above we were seeing the meaning of what your husband said to you and now, let’s see some other important things….⤵️⤵️

Although he has said everything to you by saying his money is his but still, you can see if he deserves you or not by reading the below-listed points….⤵️

11. Does He Yells At You On Small Things?

Yes, if your husband also yells at you on small things then trust me, he is not a good husband and according to me, he’s not a good man too…..!!

But if he never yells at you and loves you very much then you can think about not leaving him….🌺

12. Does He Give Importance To You?

If yes then you can think about not leaving him but if he doesn’t value you then I don’t think there is a sense in living with him….🙏🌺

14. Leaving Him & Giving Him Divorce is The Last Option🙏

If it’s becoming very hard for you to live in your husband’s house and you think you need to leave him because you deserve a better husband then you can leave him and give him a divorce….🌺

You can go to your mom’s house or your friend’s house who used to study with you and had a crush on you, he will help you….

So, you can plan to leave him and can easily leave him in the next one or two days………..🌺

That’s it for this post, hope you liked my post and I was able to clear all your doubts…..

But if you still have then you can book relationship advice with me, soon I am going to start, you will find it at bottom of my blog….⤵️⤵️

Will see you again in a next post, till that take care and stay ahead….