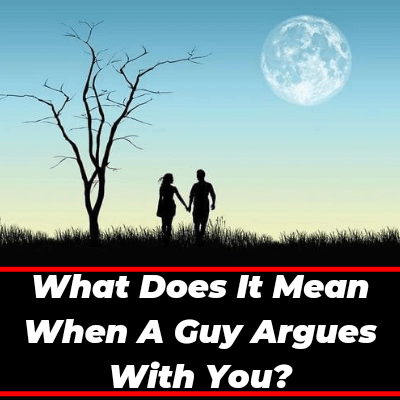 I am also like the guy you have because I also used to argue with the girl I love, actually my love story started with arguments, while arguing with her I didn’t get to know when I fell in love with her.💕

If you want to know the exact reasons why a guy argues with you then this post is for you…..

Table of Contents show
1. It Depends Upon Who Starts The Argument First🌺
2. Does He Get Shy Or Nervous When You Go Close To Him?💕
3. Maybe He’s Little Bit Immature 🙏
4. It Depends Upon How Every Argument Ends Between You & Him❣️
5. Does He Sit Near To You?
6. Maybe He’s Finding Ways To Talk With You💞
7. Maybe He Wants To See Your Face💕
8. Talk With His Best Friend or Other Friends😎
9. Do You Find Him Looking At You Most Of The Time?💕👁️
10. It Also Depends Upon How He Behaves Rest of The Time❣️
11. Why A Guy Argues With A Girl?

1. It Depends Upon Who Starts The Argument First🌺

Yes, it really depends upon who starts the argument first.

But if it’s equal like sometimes he starts an argument and sometimes you, it means you both have feelings for eachother in your hearts……yes, it’s the reality……🌺

2. Does He Get Shy Or Nervous When You Go Close To Him?💕

It’s a confirmation trick i.e if you want know whether he likes you or not then you can follow this step…..Only follow this if you like him otherwise just avoid…….

Then girl he is in love with you, by arguing with you he’s just hiding his feelings from you…..

Here “very close” means a foot or less gap between you and him.(➡️when you sit with him😎)

But if he behaves normal when you go close to him like he doesn’t get shy or nervous, it means he has zero feelings for you…..

The age 16-20 is an age where a guy doesn’t know the importance of behaving nicely with a girl.🌺

Even guys at this age, argues with the girl they love because they are still kids and don’t know that they should not argue with the girl whom they like or love.😍

4. It Depends Upon How Every Argument Ends Between You & Him❣️

When a argument starts it means at a point of time it will end.👍

In your case, all you have to do is check how every argument ends between you and him to know what’s in his heart about you.

If every argument between you & him ends with a smile on both of your faces, it means he likes you and maybe somewhere you also like him.🌺❣️🌺

But if every argument between both of you ends with anger like he starts ignoring you or you start ignoring him, it means neither he likes you nor you like him, better to stay away from that guy……… 🙏👍

When a guy argues with a girl he doesn’t like then he tries to sit away from her so that he can keep his mind cool & avoid arguments.🙏

But a guy who argues with a girl he loves, he tries to sit near to her like if the girl sits on the first bench then he will try to sit on second or third bench.🌺💕🌺

Therefore, try to check where the guy you are talking about sits.

If he sits near to you but still argues it means somewhere he’s into you but if he sits away from you after a argument it means he is not into you.💕

6. Maybe He’s Finding Ways To Talk With You💞

Arguing with a girl is one of the ways through which a guy can easily talk with a girl he loves.🌺

Maybe he loves you and also likes to talk to you but he doesn’t know how to talk to you for a long time so he is arguing with you so that he can talk to you and his body can feel relaxed from inside.🌺💕🌺

7. Maybe He Wants To See Your Face💕

In my case, I loved to see the face of the girl I love, although she used to start argument many time but I also used to continue to argue because while arguing she used to look behind at me and I was able to see her so much beautiful face very patiently.

So, if you also sit in front of that guy then maybe he argues with you so that he can see your beautiful face because while arguing you will look back at him and he can easily see the moon(ur face)……😍🙏

8. Talk With His Best Friend or Other Friends😎

Let me share a secret of guys with you.⤵️

A guy shares everything with his best friend including the girl he loves and the girls he doesn’t like.✌️👍😎

If you like the guy who argues with you and u are so much desperate to know what’s in his heart about you then you can try to talk with his best friend, his best friend will share with you what he talks about you and does he like you or not.🌺❣️🌺

If you don’t like him then ignore this guy who argues with you because there is no benefit in wasting time with a guy you are not interested in.🙏👍

9. Do You Find Him Looking At You Most Of The Time?💕👁️

This is another confirming trick to find out whether he likes you or not….

Then it proves that he’s attracted towards you.🌺😍🌺

If you don’t find him staring at you then it shows that he’s not in you.🙏👍

10. It Also Depends Upon How He Behaves Rest of The Time❣️

Well, an argument takes just a few minutes to get solved.

And you need to check how he behave rest of the time.

If he behaves very nicely with you like he gives respect to you, helps you especially in exams, greets you, find ways to help you & also offers you a ride from school to your home.🌺

Then girl, he is hiding his love by arguing with you, forget about those arguments, the reality is he has become yours.😍👍

But instead of this, he doesn’t behave nicely with you and never tries to help you from himself then it shows he has no love for you in his heart.💔

There are two reasons why a guy argues with a girl:⤵️⤵️

1. His Thoughts Doesn’t Match With That Girl: Here, when a guy’s thought really doesn’t match with a girl then he can argue with her & there is a high possibility he doesn’t like her.

2. He Purposely Argues With That Girl: Here, a guy purposely argues with a girl so that he can talk with her or see her beautiful face.😍💕

His thoughts definitely matches with her but he pretends that his thoughts doesn’t match with her’s.

Here, he definitely likes that girl but he is getting afraid to tell her that he likes her.🌺

Now, you need to find out does he is really arguing with you or just pretending…..

Well, I have shared everything with you which I know about your query and I hope my post was able to clear your doubts….

But still if you have doubts, you can tell me by contacting me through “contact us” page, I will try to solve your doubts as soon as possible……..🙏👍🌺

Till that take care and have a great day ahead……🌺👍🌺