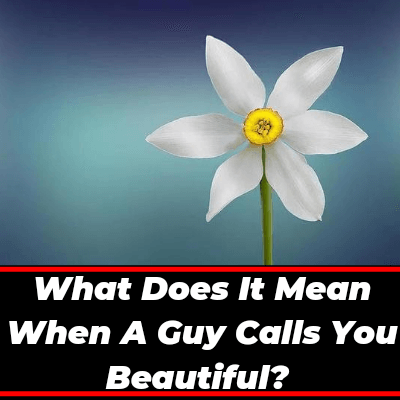 When a guy calls you beautiful then there can be many reasons behind it and if you want to know those reasons then you are at right place.🌺

Through this post, I am going to share reasons why a guy calls you beautiful, does he like you or not, how to reply him back, etc.👍

So, please don’t skip the post and keep reading till the end……🙏

Table of Contents show
1. He Has Given You A Cute Nickname✌️
2. You Are The Most Beautiful Girl According To Him😍
3. He Wants To Say He Loves You & You’re Very Special To Him💕
4. Does He Only Call You With This Name?
5. There Are Very Less Chances He’s Flirting🙏
6. He Wants To Say Your Face is Pulling Him Towards You😍
7. He Likes Everything About You💝
8. He Considers You More Than A Friend💞
9. He Wants To See A Smile On Your Face💓
10. It Means He Looks At You When You Are Not Looking💕
11. He Wants To Talk With You
12. He Wants You To Impress You & Tell You That He’s Feelings For You❤️
13. It Means He Has Opened The Doors🚪
How To Respond?
FAQ’s

1. He Has Given You A Cute Nickname✌️

He called you beautiful instead of calling you by your real name, that means he has given you a nickname.✌️❣️

And he hasn’t given you a generic nickname, instead he has given you “Beautiful” as nickname which is one of the most adorable and romantic nicknames a boy can give a girl.🌺💕🌺

Hope, i don’t need to tell you when a guy gives you cute nickname then what’s in his heart about you.❣️

2. You Are The Most Beautiful Girl According To Him😍

When a guy calls you beautiful, it means that you are the prettiest girl according to him and atleast more good looking than other girl in your class.💕

He could have called you with any other nickname like brownie, sunshine, adorable, etc.

But he called you beautiful, it shows that he finds you very beautiful and your beauty is continuously pulling him towards you.❣️

3. He Wants To Say He Loves You & You’re Very Special To Him💕

Tell me, why would you call a guy beautiful?

I know you won’t call any guy with this nickname without thinking, you will only call a guy beautiful if you loves him and his face too much.🙏❤️

In the same way, if a guy calls you beautiful, it means he loves you and attracted towards your face too much and you can’t deny it.🌺💕🌺

If you also love him then congratulations dear because he also loves you back.

4. Does He Only Call You With This Name?

For more clarity, please try to check, does he only call you by this name?

If he calls many other girls with this nickname or with other nicknames and also talk with those girls a lot then girl, he is not the right guy for you.

But if he only calls you with this name and doesn’t talk much to other girls then he really likes you and his love for you is true.💞

So, as per me, the guy you are talking about was not flirting but he just called you what his heart told to call, trust me, he really find you very attractive.🌺💕🌺

6. He Wants To Say Your Face is Pulling Him Towards You😍

When a guy calls you beautiful it means he is attracted towards your pretty face and indirectly he’s saying that your face is his biggest weakness i.e ur face is pulling him towards you.❣️💕

7. He Likes Everything About You💝

Do you think when a guy calls you beautiful then it means he is just attracted towards your face?

No, not at all, he is not only attracted towards your face but he likes everything about u like your smile, eyes, nose, teeth, hair, hands, nails etc.💕

8. He Considers You More Than A Friend💞

First of all, a guy does not give a girl a nickname if he considers a girl as his friend and if he gives a nickname, then he calls her with a friendly nickname like Fox, Cookie, Dolly, Smiley etc.🙏

But the guy you are talking about gave you a nickname and not a normal nickname but a romantic nickname i.e Beautiful which is used by a guy to call the girl he really loves.🌺💕🌺

So, one thing is for sure that he considers you more than a friend.❤️

9. He Wants To See A Smile On Your Face💓

It’s quite obvious that you will smile when he will call you beautiful and that’s what he wants to see, yes, he wants to see that cute smile on your face which has won his heart.💖

If you didn’t smile last time, try to smile a little the next time he calls you by this cute name.(only do this if you like him)👍

10. It Means He Looks At You When You Are Not Looking💕

I am also a guy and I also gave my crush a nickname ‘Gorgeous’.

At the same time, I also used to look at my crush’s face very patiently when she was not looking because her face was so much beautiful, although she is not with me but I still love her!!💔

So, trust me, when a guy call you beautiful then it means he looks at your face many times when you are not looking.❣️

If you want to confirm this then try to suddenly look at him, trust me, you will catch him too many times seeing your face.👍👍

Maybe he loves to talk to you and he knows very well that when he calls you beautiful, you will start talking to him and then he will be able to talk to you.

This can be a reason why he called you with that nickname.👍👍

This also shows that he is in love with you….🙏💞

12. He Wants You To Impress You & Tell You That He’s Feelings For You❤️

Yes, when a guy calls you beautiful then it means he wants to impress you and win your heart.

He thinks that when he will call you by this name then you will get to know that he has feelings for you and you can come closer to him.

13. It Means He Has Opened The Doors🚪

Yes, by calling you beautiful he wants to tell you that he likes you and he has opened the doors of his heart for you.

If you like that guy then when he calls you beautiful then just go and look into his eyes and ask “do you like me?”❣️(if he gets silent and nervous then it’s a clear cut sign he truly loves you)

I am sure after that you will get to know what’s in his heart.

him, gradually he will stop impressing you.👍

#1 What does it mean when a guy calls you beautiful but he has a girlfriend?

It means he’s trying to shift on you from his current girlfriend, and as per me, you should stay away from this guy because he will leave you after some time when he will find a more beautiful girl than you.🙏🙏

#2 What does it mean when a guy says you are the most beautiful girl?

It means he has fallen in love with you otherwise he didn’t call you the most beautiful girl.❣️

#3 What does it mean when a guy calls you beautiful over text?

That’s it for this post friends, hope you liked it and I was able to solve your issues.

Will see you in next post, till that take care, choose someone wisely and stay ahead……👍👍🙏