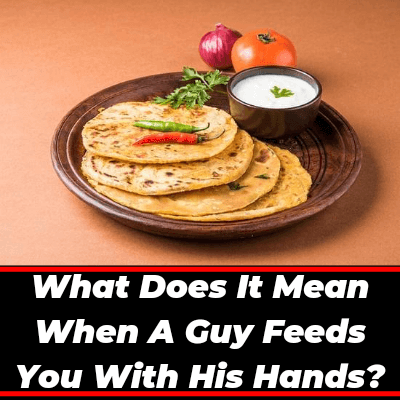 So, you were having food with a guy who is your friend and at that time he started feeding you with his hands, and now, you are not sure why he did this.🌺💕🌺

Don’t get worried, because through this post, I am going to share all the reasons why a guy feeds you with his hands…….

So, without wasting a single second, let’s dive in……⤵️⤵️

1. It Shows How Much He Cares About You💕

If you don’t know the answer let me tell you the answer.

Your mother used to feed you with her own hands because you are her daughter and she cares for you more than anyone else.❤️

In the same way, if a guy feeds you with his hands it means he really care about you that no other guy can’t.💕

Now, probably you are thinking that why he cares about me?

Well, only he can answer to this question but as a guy I can say that he loves you & that’s why he cares about you.🌺❣️🌺

Tell me, why did he feed only you with his hands, why not to any other girl?

So, you need to understand that when a guy feeds you with his own hands then it means he loves you….💗

Maybe you were looking so much beautiful at that time and as he already has feelings for you.🌺

So, he got so much love on you that he was not able to control himself from feeding you food with his hands.💕

4. It’s More Than A Friendship💞

If you still think that he considers you only his friend then believe me, you’re thinking wrong dear.🙏

Because there are very less chances a guy who considers a girl as his friend feeds her with his hands.

So, you need to understand that it’s more than a friendship between you and him and in other words he is in love with you.🌺💘🌺

5. He is Hiding His Feelings💕

As per me, if a guy is feeding you with his own hands but still he hasn’t confessed that he loves you.🌺

If you like this guy then next time when he feeds you any food with his hands then grab his hands, look into his eyes and ask him “why don’t you say you love me?”🌺💕🌺

Trust me, after this, he will confess that he likes you so much……🌺💕🌺

6. It Shows That He Can Never Hurt or Cheat You🙏

When a guy feeds a girl with his hands it shows that he’s totally into that girl and he can never hurt or cheat her…..🌺💕🌺

In the same way, the guy you are talking about can never hurt or cheat you, even he cannot think about cheating on you…..🙏💕

Probably you are thinking that how I am able to know this? Well, I am a guy and I also truly loves a girl so I know about guys a lot…..🙏🙏

7. Did He Look Into Your Eyes?

If you remember then please check whether he looked into your eyes and was serious or not.🌺

If he looked all the time into your eyes and he was serious(with a sweet smile on face) then it shows that he’s likes you and attracted towards you…..💕

But if he wasn’t looking into your eyes and everything was looking everything then it’s a doubtful situation that what’s in his heart about you.💔

8. He Wants To Say That He is Making A Move, When Will You?

When a guy feeds you with his hands then he comes very close to you like he look into your eyes, your face, your mouth, and his fingers also touch you……🌺

According to me, by doing this innocent and cute activity he wants to say that he is making a move, when will you make a move?

Now, if you are really into him then you should try to make a move but if you aren’t then just leave thinking about him.👍

If he was totally into you like he was just looking at your face, he was getting happy from inside with every piece of food he was feeding to you, and the love for you was clearly visible on his face..😍

Then believe me girl, you are his queen and no one else can replace you in his life👑.

You can also look for more signs from him to know if he loves you or just considers you his friend.️👍✌️

10. It Shows That There is Too Much Love Between You & Him💞

Maybe you are thinking that how it looks to others when he feeds me with his hands.

Many people say that when a guy feeds a girl with his hands, it doesn’t look good.🌺

But as per me, when a guy feeds a girl with his own hands then it looks so much romantic, it shows closeness and how much he cares about her.💕

So, should you eat from his hands?

Well it totally depends upon how you feel about that guy i.e if you are attracted towards him then there is no issue in eating from his hands, instead it narrows the distance between you and him.❣️

If you aren’t attracted towards him then avoid eating with him or from his hands.

So, that’s it for today’s post, hope you liked it and I was able to make everything clear……🙏

Will see you in a next post, till that take care and stay ahead……🌺