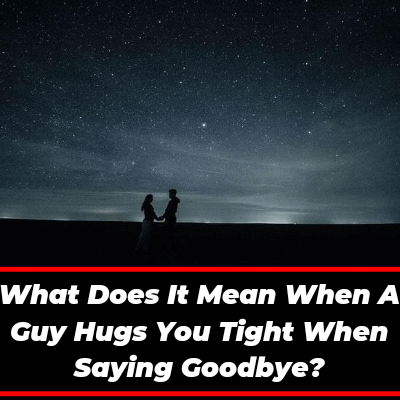 So, a guy (most probably your friend) hugged you tight while saying goodbye but you are not sure why he hugged so tight…..🌺💕🌺

Don’t worry, because through this post I am going you to share exact reason why a guy hugs you tight……

So without wasting a single second, let’s dive in…..⤵️⤵️

Table of Contents show
1. He Doesn’t Want You To Go💕
2. He Wants To Show You That He & His Body Needs You
3. He is Feeling Very Nice & Completed From Inside While Hugging You
4. His Emotions Are Overpowering Him
5. No Doubt He Loves You💕
6. Indirectly He is Showing You That He Will Miss You
7. He Wants To Show That His Eyes Will Wait For You👁️
8. It’s More Than A Friendship💕
9. He Really Cares About You❤️
10. Try To Question Him

He may not tell you directly but by hugging you tight, he wants to show you that please don’t go away because you have become his life.🌺💕🌺

You can also confirm this by looking at his eyes and facial expressions, you may find that his eyes are telling you something and his sad face confirms that he doesn’t want you to go anywhere else.

2. He Wants To Show You That He & His Body Needs You

If he’ll hug you normally then he knows very well that you will not notice because you will find everything normal.

But when he’ll hug you tight, he knows that you will have a doubt that why he hugged me so tight?

If he is a little shy guy then by hugging you tight, he is trying to show you that he & his body really needs you, if you go then it will be very painful for him to stay away from you alone at home.🌺💕🌺

What you can do here?

If you like him then you can go with him out and enjoy good food, beautiful, and nice weather outside. This will make you both come closer than before.

3. He is Feeling Very Nice & Completed From Inside While Hugging You

The reason he is squeezing you softly or hugging you little bit tight is that he and his body is feeling very nice and completed while coming near to you.

This also shows that he is attracted toward your face and colour.

4. His Emotions Are Overpowering Him

There is no doubt that he likes you and as a result he has a lot of feelings and emotions about you.

And when he started hugging you all those emotions get ignited and overpowered him & as a result he started squeezing you little bit.

This point deserves first position in this list but I forget to add this in the starting so now adding this.

If he is hugs you tight and taking long time then this shows that he loves you and his heart beats only for you.

If you are doubting whether he has feelings for you or not, then please don’t doubt because he likes you a lot and there are too many feeling for you than you think.🌺💕🌺

6. Indirectly He is Showing You That He Will Miss You

Will you miss someone if you love them? Yes?

The same is happening with him and he clearly knows that if you go, he will miss you every minute at his home and also he may have sleepless nights because you will not be with him at that time.💔💔

And by hugging you tightly, he is indirectly showing you that he will miss you too much.

Next time if he hugs you tight as usual then you can say him “Should I come with you?”

If he loves you then he’ll say yes and also confess his love infront of you.💕

7. He Wants To Show That His Eyes Will Wait For You👁️

When a guy falls in love, he often tries to look at the girl he loves because he and his eyes get used to seeing that girl’s face.

And if his eyes are not able to see that girl because she is not in front of him then he starts to feel uncomfortable and lonely.

The same way, your guy’s eyes are also addicted to continuously see your face and as he know that when you will leave, he will feel uncomfortable and alone because you will not be infront of his eyes.💔

That’s why he hugs you little bit tight so that you can know that he doesn’t want you to leave.

8. It’s More Than A Friendship💕

If you still think that he is a friend of yours then you are wrong here because a friend never hugs his/her friend tight until or unless he/she has love feeling for their friend in their heart.

As per me, it’s more than a friendship between you and him.

You can confirm this by asking him if he likes you, I am sure he will agree that he is falling in love with you. 🌺💕🌺

9. He Really Cares About You❤️

A tight hug also shows that he is protective of you and cares about you.

Being with you he tries to take care of you and also protect you from other guy you try to impress you. After saying goodbye it’s for sure that he will not be with you for sometime so by hugging you tight he is showing how much he cares about you.

Well, I have shared many reasons with you but still if you still have a doubt then next time whenever he hugs you tight while saying goodbye then try to ask him “Why are you hugging me tight? Do you like me?”

I am sure he will tell you what’s in his heart.💕

Hope I was able to solve your query, if yes, then please try to share this post with your friends this will help me to write more and more for you…..