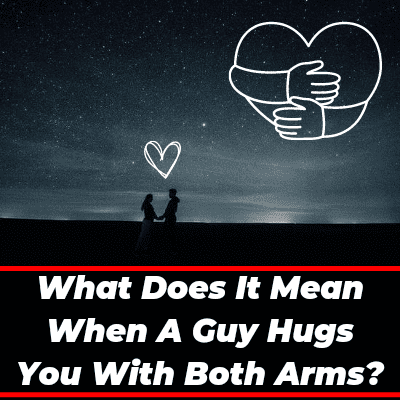 Don’t get worried sis because through this post, I am going to share all the reasons why a guy hugs you with both arms and what it means…..👍🌺

So, without further delay, let’s start this post…..⤵️⤵️

Imp: Don’t skip any point of this post otherwise you won’t understand anything.🙏

Table of Contents show
1. Both Arms Hug Always Shows Love & Affection🌺
2. Was it A Goodbye Hug?
3. There’s No Doubt, He Loves You💕
4. He’s Hiding Something From You😎
5. Did You Look Into His Eyes or At His Face?
6. Did You Feel Like There Was Something Different Behind That Hug?
7. Was it A Tight Hug or A Loose One?
8. Duration Of The Hug Really Matters🌺
9. Was He Serious or Not?
10. Try To Dig Out What He Feels About You?😎
11. Why Would You Hug A Guy With Both Arms?🌺
12. Does He Show You Other Signs Of Attraction
13. If You Are Into Him Then Ask Him💕

But when a guy hugs you with both arms it shows love and affection towards you….

So, if he hugs you with both arms it means he loves you, he cares about you, he is affectionate towards you or maybe he has become completely yours.🌺💕🌺

If he hugged you with both arms while saying goodbye then it means he is telling you that he doesn’t want to leave you & he will miss you at his home…..

That’s why the two-arm hug is also known as ‘never let you go hug’…..🌺

I know, when he hugged you with both arms then the first question that came to your mind was “does he love me?”

I know you won’t believe me, so here’s the proof….

Tell me, why did he hug only you with both arms, why didn’t he hug any other girl?

Hope now, you have understood how much he loves you….❣️

4. He’s Hiding Something From You😎

First of all, we guys don’t hug a girl with both arms but he hugged you with both arms, it means that he’s hiding something from you…..😎

5. Did You Look Into His Eyes or At His Face?

If you looked into his eyes or at his face while hugging, try to remember what you were seeing in his eyes and on his face.

Like if he was talking to you very softly, his love for you was clearly visible in his eyes, his eyebrows were a little raised, he felt so good after hugging you, & he was so humble to you then it means he is really into you…..😍

But if there was no seriousness on his face and there was no love visible for you in his eyes it means he is not into you….💔

6. Did You Feel Like There Was Something Different Behind That Hug?

We guys can sense in a second whether a girl likes us or not by just checking how she hugs us….🌺

Like us, I am sure, you girls can also sense very easily whether a guy likes you or not by seeing how he hugs you….

When he hugged you if you felt something different in that hug then believe me, he likes you, you have sensed his love….❣️

But if you felt everything normal then it means he doesn’t like you…..💔

A tight hug from a guy indicates that he’s into you, so if he hugged you a little tight then it means he’s really into you….😍

Whereas a loose hug indicates that he is fearing to come close to you even if he likes you…..🌺

8. Duration Of The Hug Really Matters🌺

If he hugged you just for a second or two then it means it was a friendly hug from him….💔

But if he hugged you for about 4 to 5 seconds or even more like he got completely lost in that hug, it means he is saying that he needs you and he has become completely yours…..🌺💕🌺

You can easily know if he likes you or not by remembering whether he was serious or not while hugging you….👍

If he was serious like he was silent and you noticed that he doesn’t want to leave you then it means he really likes you and by hugging you with both arms he showed you that he has feelings for you..😍

But if he wasn’t serious like he was laughing a lot and the duration of the hug was just a second or two and he left you very easily then there are more chances that he just sees you as his friend…..💔

If you like him and want to know whether he likes you or not then you can try to dig out what he feels about you by following some clever tricks….😎⤵️

You can text him “his name, I am free this Sunday & I really want to eat food at XYZ restaurant, will you please take me there this Sunday?”

If he agrees and comes to have food with you in that restaurant, it means he is really into you…..🌺💕🌺

If you don’t have his number then you can get his number from one of his friends.😎

Yes, try asking your heart “Why would I hug a guy with both arms?”

If you get an answer from your heart, then this is also the answer to your question why did he hug you with both arms..🙏🌺

12. Does He Show You Other Signs Of Attraction

Sis, we can’t find out exactly whether he likes you or not just by analyzing the way he hugged you so we also need to look for more signs from him…🙏🌺

If he gets shy in front of you, he can’t look into your eyes while talking to you, he tries to impress you, he tries hard to help you even if you don’t ask to, he gets quiet when you both are alone, he always talks with you with a cute smile on his face, he talks with a soft voice to you, he drives by your house, he offers you a ride home in his car, & you often catch him looking at you then it means he really loves you and the two arm hug was just a result of his love………🌺💕🌺

But if he doesn’t show any of the above-mentioned signs then it means he doesn’t love you and the two-arm hug was just a friendly gesture from him…..💔

If you don’t like him then just forget how he hugged you, take a deep breath and forget about it……👍🌺

But if you like him and he also shows you other signs of attraction then you should ask him, why he hugs you with both arms?🌺

Tomorrow when you both are saying goodbye to each other, try to initiate a hug, if he hugs you again with both arms and for a long time then hold his hand and look into his eyes and ask “Why are you hugging me with both arms & for a long time? Why don’t you say you love me? For how long you will hide that you have fallen in love with me?”❣️

I am sure, he will confess that he loves you very much……🌺💕🌺😎

So, this was my post, if you liked it make sure to share it on your social media handle……👍🌺