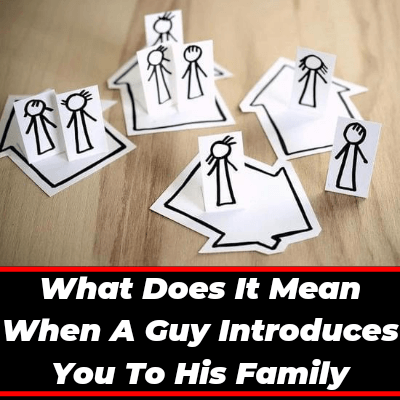 So, a guy introduced you to his family but at the same time, you aren’t sure why he did this?

Don’t worry sis because through this post, I am going to share the exact reasons why a guy introduces you to his family…….🌺💕🌺

So, without wasting a single second, let’s dive in…..⤵️⤵️

Tabel of Contents show
1. He is Introducing His Future Wife👰
2. He Loves You More Than His Life💕
3. He is Serious & Genuine🙏
4. May Be He Promised With His Family To Show Them His Love
5. May Be It’s A Hint For You That Soon He is Going To Marry You💕
6. He Wants To Show You His Family
7. He Wants To Show His Family, How Important You Are To Him💕
9. He Wants To Check Whether His Family Will Like You or Not
9. Ask From Him❣️
FAQ’s

1. He is Introducing His Future Wife👰

I am not kidding but your guy is introducing you as his future wife because no guy would ever introduce a girl to his family for no reason….🌺

To confirm this, you can check his facial expressions while he is introducing you, you will find that there will be love for you in his eyes and he will feel a little bit shy as well.

2. He Loves You More Than His Life💕

Do you think a guy will introduce any random girl to his family?

No a guy will not, he will only show a girl to his family members if he truly loves her.

And if a guy introduces you to his family members then one thing is sure that he loves you more than his life.🌺💕🌺

Still doubting, whether he loves you or not?

Then tell me, why did he introduce only you to his family, why not any other girl?

Hope now, you have understood that how much he loves you…❣️

These days, there are a lot of fake guys available around who just pretend to love someone and once their intentions are met then they move on to the next girl.🌺

But he is not like them, he is genuine and very serious towards his relationship with you that’s why he is introducing you to his family so that you can believe that he will make you his wife and his love for you is true.😍❣️

If you are sure that he genuinely love you then please never leave this guy.🙏💞

4. May Be He Promised With His Family To Show Them His Love

If his family members know that he is in love with a girl (you) and then there is a probability that he has promised them that soon he will show his love to them, this is the reason why he introduced you to his family.

His family was desperate to see their son’s choice and their son fulfilled their wish.

You can easily confirm this.⤵️

If his family members see you as their future daughter-in-law then you will find at the time of meeting them that all of them will be very nice to you and will bless you with infinite happiness on their face as their son has chosen a diamond (you) in this world as his wife.🌺💕🌺

5. May Be It’s A Hint For You That Soon He is Going To Marry You💕

If his and your age is perfect for getting married then by introducing you to his family, he is giving you a hint that soon he is going to send his parents for proposal to your parents to marry you🌺💕🌺

6. He Wants To Show You His Family

As he loves you so he wants to show you how many members are there in his family & how they look, so that you can never complain to him that he loves you but never introduces his family members.

Now, your wish of seeing his family members is fulfilled.

7. He Wants To Show His Family, How Important You Are To Him💕

Situations are not always in our favor and if his family is not understanding his love like they think they their son’s choice is not good and may be they think that there son is not able to understand what love is.

Then by introducing you to them he wants to show his family that how important you are to him and the girl(you) he likes is a very nice girl who is down to earth and pay respect to everyone.💕

9. He Wants To Check Whether His Family Will Like You or Not

This is also possible that he is in fear that whether his family will like you or not and to overcome this, he has decided to familiarise you to his family.

After coming back home, he will ask his family especially his mom that isn’t his love(you) looks like a queen? 🌺💕🌺

Yes sis, if you like him then please try to ask him why he introduced you to his family, I am sure he loves you but still, if you hear the same from his mouth then this will be a next level thing….🌺

Whenever you meet him today or tomorrow, just look into his eyes and ask “Why did you introduce me to your family? Why don’t you say you love me?”❣️

I am sure, he will confess that he really loves you…….💕

So, these were the 9 points, hope you liked these….

#1. If a guy introduces you to his family he won’t cheat?

Yes, it’s a very solid sign from him that he won’t cheat you. 👍👍

#2. What does it mean when his mom likes you?

This means that his mom likes his son’s choice and it’s a clear cut sign from his mom that she won’t hesitate to make you his son’s wife.💕

#3. What does it mean when a guy introduces you to his mom?

This means that he has told his mom about you and now may be his mom requested him to introduce his love(you) to her so that she can see you and know more you.

If his mom likes you after seeing you and talking with you then it’s a green signal for you that they are ready to make you their house’s daughter-in-law.🌺💕🌺

That’s it for today’s post, hope you liked it…..

Take care and have a very fabulous day ahead….🙏👍