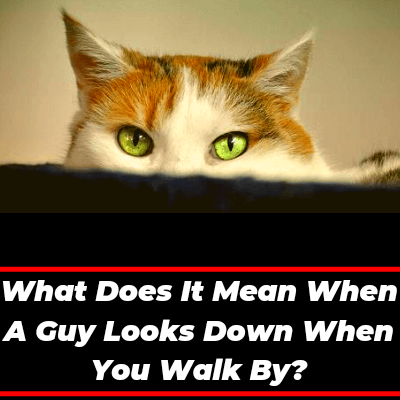 I am also like the same guy you are talking about, I also look down when the Girl I love walk by, I love her a lot but am afraid to look into her eyes…..🌺💕🌺

Similarly, if a guy looks down when you walk by then there can be many reasons behind it…..🌺

But don’t get worried because through this post, I am going to share all the reasons why a guy looks down when you walk by and what does it mean…..🌺

Table of Contents show
1. He is Shy Of You💕
2. He Doesn’t Want His Love(You) To Feel Uncomfortable😍
3. You Are Soooo Beautiful To Him💕
4. He Is Hiding The Fact That He Was Looking At You💕
5. He is Afraid Of Losing Your Friendship💞
6. You Always Dominates Him😍
7. He Loves You But Scared To Make A Move♥️
8. He is A Genuine Guy and Different From Other Guys🙏
9. He Knows in Advance That You Will Look At Him 🌺
10. He is Afraid That You Will Be Able See Love For You in His Eyes & On His Face💕
11. If You Like Him, You Have To Make A Move💕

Yes, he is shy of you that’s why he looks down when he sees you, he is very shy to look at you or into your eyes……🌺

And I am also a shy guy so trust me, a shy guy only looks down when a girl walk by when he really loves her……

Congratulations Girl, he is becoming yours……🌺😍🌺

2. He Doesn’t Want His Love(You) To Feel Uncomfortable😍

Won’t you feel uncomfortable or unsafe when you’re walking and a guy is constantly staring at you with bad creepy eyes?

Yes you will feel, and as he loves you so he doesn’t wants you to feel uncomfortable by continuously looking at you that’s why he looks down when you walk by……

This also shows that he cares about you….❣️

3. You Are Soooo Beautiful To Him💕

Do you think he looks down when you walk by without any reason?🌺

No dear, he is looking down because of a reason and that reason is you are sooo much beautiful to him, he is attracted towards your face…..

But he is scared to look at you when you are looking at him because he knows if he looks at you then there will be a eye contact between you and him and as he is shy of you, so he won’t be able to handle that romantic situation…..🌺💕🌺

4. He Is Hiding The Fact That He Was Looking At You💕

Do you think he was not looking at you when you entered the class and walked by him?

If you think then you are absolutely wrong because he looked at you when you entered the class but when you started looking at him, he quickly looked down….🌺💕🌺

And by doing, this he is hiding the reality that he was looking at you when you walk by……😍

And a guy only looks at a girl when she is not looking when he likes her…..😍

5. He is Afraid Of Losing Your Friendship💞

Tell me, how do you feel when a guy stares at you constantly?👁️

He knows that if he continuously look at you then you will avoid talking with him, he looks down when you walk by because he doesn’t want to lose your friendship…..🌺💕🌺

6. You Always Dominates Him😍

The girl I love always dominates me while arguing with her, making eye contact, talking, looking at each other for a long time…..💕

I always get shy in front of her because she is so bold and she always dominates me….😍

Similarly if you also dominates the guy you are talking about then this is the biggest reason why he looks down while you walk by despite he loves u…..🌺💕🌺

7. He Loves You But Scared To Make A Move♥️

Now, you will have ask me, if he loves you then why he looks down when he sees me?

He looks down because he lacks courage to see you patiently even if his body wants to, he thinks you won’t talk with him if he keeps looking at you….😍🙏

It is just like the sea which is silent before the tsunami comes, he loves you sooooooo much but afraid to express his feelings with because he is feared of your anger and rejection…..💔🌺💕🌺

8. He is A Genuine Guy and Different From Other Guys🙏

If a guys looks down when you walk by then trust me, he is a genuine guy and different from other guys who just shamelessly keep looking at a girl with bad creepy eyes…..🌺

9. He Knows in Advance That You Will Look At Him 🌺

10. He is Afraid That You Will Be Able See Love For You in His Eyes & On His Face💕

A guy can easily hide his love for a girl but he can’t hide with his eyes and face i.e you can easily find a guy loves you or not just by looking into his eyes or at his face.😎

The guy you are talking about definitely loves you and he knows very well that you are a very smart girl & if he would try look into your eyes, you will catch up in a second that he likes you and attracted towards your complexion.

In other words he is hiding his love for you….

Try not to think that he is an egoist or a guy with a lot of attitude…..🙏

No dear, he has zero ego and attitude, he is afraid to make a move or tell you that he likes you…..🙏💕

If you like him then you have to make a move, spend more and more time with him like you can hangout with him in his car, try to sit with him in your class, go to his house if you gets an opportunity…….🌺😍🌺

Just try to remove that fear from his heart which is preventing him from expressing his feelings to you…..🌺💕🌺

This is the end of the post, hope I was able to clear all ur doubts about that guy…..

Will see you in a next post, till that take care and stay ahead…….

Have a great day ahead and bye……👍🙏