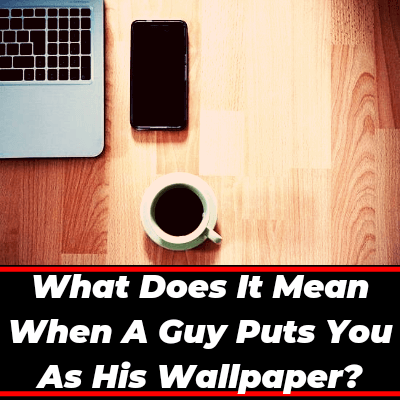 Don’t get worried sis, because I also use my girlfriend’s photo as my smartphone wallpaper…..👍

And through this post, I am going to share all the reasons why a guy puts you as his wallpaper and what does it mean…..👍👍

So, without wasting a single second, let’s start this post…..⤵️⤵️

1. He Wants To Show You That He Really Loves You💕

He knows very well that when you’ll see your photo as his wallpaper, you’ll get to know that he has feelings for you and he likes you, that’s why he used your photo…..🌺💕🌺

2. He Likes Looking At Your Face🌺

When a guy puts you as his wallpaper then it means that he likes to see your beautiful face which has won his heart.😍

In other words, he is addicted to see your face and this shows that you are so much beautiful according to him……🌺

3. Indirectly He is Showing You That He Has Become Yours💞

Do you think, he doesn’t know what he is doing by putting you as his wallpaper?

If ‘yes’ then you are wrong here sis because being a guy he knows very well that when you will see your photo as his wallpaper, you will doubt whether he considers you as his friend or he loves you…..

This is what he wants you to feel, by putting you as his wallpaper, indirectly he’s showing you that he has become yours………🌺❤️🌺

Most guys use pictures of famous wrestlers, heroes, or themselves as their wallpaper….

5. It’s A Compliment From Him About You😍

As a guy I can say that a guy will not use a girl’s picture as his wallpaper if she doesn’t look good.

He is using you as his wallpaper it means you are beautiful, he likes your beauty and by using your photo he is complimenting your beauty, indirectly he is saying you that you are angel for him……💕❣️

A guy rarely puts a girl’s photo as his wallpaper but if puts then it means that she is his first and last love and no other girl can ever replace her in his life…..

7. You Have Become His Aim & Motivation 💕

You don’t know girl, but you have become his aim and motivation….

He is using you as his wallpaper because you are his motivation, your face provides him motivation to work, to earn a lot of money, to stand up from every fall, to bounce back from every setback…….

And using you as his wallpaper also means that you have become his ultimate aim i.e he wants to make you his wife and for this, he will try and work hard until you don’t become his wife…..❣️

I am sure he misses you a lot at his home and he is using you as his wallpaper as a substitute of yours so that whenever he misses you he can feel that you are with him…..💕

Hope I don’t need to explain you that when a guy misses a girl then it means he is in love with her…….🌺💕🌺

Only those who are very close to a guy’s heart can be on his phone’s wallpaper and trust me, a guy can never hurt someone who is near to his heart….🙏

He is using your photo as his wallpaper it means you are very close to his heart, he cares about you and he can never hurt you, the only thing you can get from him is love and happiness…….🌺💕🌺

10. It Makes Him Happy From Inside💒

Whenever I see my girlfriend’s photo on the home screen of my smartphone, I feel very happy from inside………

In the same way, he also feels happy from inside when he sees your face on his wallpaper.❣️

Looking at your photo he thinks “Ur name, you are very beautiful, when will you be mine?”

Along with this many other thoughts about you come to his mind when he sees you on his wallpaper.🌺

He loves you that’s why he’s using your image as his wallpaper, and you need to understand that it’s more than a friendship between you & him…..🌺

I am sure the picture he is using as his wallpaper is a picture in which you are smiling…..

And he is using that particular picture because your are smiling in it and your smile has become his life, whenever he sees that picture he feels too much love on you and as a result he continues to see it and keep it as his wallpaper…..🌺

13. This Proves That He is Making Moves♥️

When a guy puts you as his wallpaper it means he is making moves and there is a very high possibility that he will continue to make moves until you become his girlfriend♥️ or you tell him that you don’t like him.💔

14. Maybe He See You As His Future Wife👰

Maybe, the guy you are talking about sees you as his future wife, maybe he often thinks about marrying you……👰

If you want to know and you’re also into him then you can ask him if he thinks like this….👍👍

Girl, very few girls are lucky to find a guy in their life who keeps his girlfriend’s pictures as his wallpaper…….

Tell me, does he still need to prove that how much he loves u?

If you also have feelings about him then you can try to confess your feelings in front of him but if aren’t interested in him then just leave….👍

If you like him & he is a genuine guy and you’re sure that he loves only you and no other girl will be in his mind ever then you can try to approach him and ask him by looking into his eyes why he is using your picture as his wallpaper.🌺

Hope then he will confess that he loves you & can’t stay away from u…….

Bonus Tip: If you like him then don’t feel awkward or get feared about he is using your photo as his phone’s wallpaper because if he really likes you then he won’t do anything which can hurt you in anyway physically or emotionally, so don’t get worried……🙏👍

If you don’t like him then go and tell him to remove your photo from his wallpaper and then if he doesn’t remove then just don’t pay attention to him, gradually he will start forgetting you….👍👍

So, this was my post, hope I was able to clear your all doubts about that guy…..

But if you have still doubts then you can contact me through “contact us” page, I will try to reply you back as soon as possible……..🙏👍

Till that take care, stay ahead and safe……