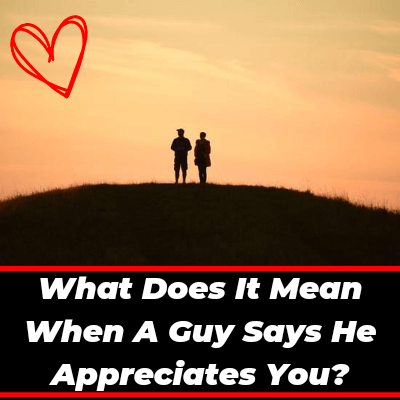 Don’t get worried sister because through this post, I am going to share all the reasons why a guy says he appreciates you and what does it mean…..👍

Table of Contents show
1. It Means He Has No Complaints With You❣️
2. He is Hiding Something😎
3. He Likes How You Treat Him😍
4. He’s Thankful To God For Having You in His Life🌺
5. How He Said It Does Matter🌺
6. He Respects You?🌺
7. Does He Like You?
8. Look For Other Signs of Affection💕
9. If You Are Into Him Then Ask Him🌺

1. It Means He Has No Complaints With You❣️

And if a guy has no complaints with you, it means you are perfect according to him and atleast you are much better than other girls to him…..🌺😍

2. He is Hiding Something😎

I don’t know at what moment he said that he appreciates you but I am sure he is hiding something from you….🙏

Maybe he wanted to say something else like “he likes you” but due to shyness he just told you he appreciates you…..

And tell me, why he said only to you that he appreciates you, why not to any other girl??

So, as per me, he is hiding something in his heart from you, maybe he’s hiding that he loves you…..🌺💕🌺

3. He Likes How You Treat Him😍

Because by saying he appreciates you, he has clarified that he is happy with your behavior that how nicely you treat him.🌺

4. He’s Thankful To God For Having You in His Life🌺

By saying he appreciates you indirectly he’s saying that he is thankful to God for having you in his life…..🙏🌺

He is grateful that you are around him and for everything you have done for him….🌺

5. How He Said It Does Matter🌺

To know he is serious or not or he has feelings for you or not, you need to recall in what voice tone and how he said it to you………..🌺

If he was looking a little sad, his voice was very soft, and you felt like he was about to say something else but he wasn’t able to say, it means he was really serious and maybe he likes you…🌺💕

But if he has no sadness on his face, his voice wasn’t soft, and he just went away after saying he appreciates you then it means he wasn’t serious and more chances he doesn’t like you…..💔

When a guy says he appreciates you then it means he respects you….🌺

He respects you as a good friend, a girl he can trust blindly, or maybe he respects you because you are the girl he loves……………🌺💕🌺

I know you are very desperate to know the answer of this question…..😎

But dear, it’s very difficult to say whether he likes you or not just by analyzing he said he appreciates you……🙏

He just said he appreciates you, so with only this, no one can say with 100% conviction whether he likes you or not……

Bonus Tip: Read 8th & 9th point of this post to know whether he is really into you or not ⤵️

8. Look For Other Signs of Affection💕

To know if he is really into you or not, you need to look for some other signs of affection…….⤵️

If he talks to you in a soft voice, you often catch him looking at you, he gets shy in front of you, he can’t see you in eyes while talking to you, every eye contact between you and him ends with a smile, he tries to help you a lot, he finds excuses to talk to you, even he offers you a ride home in his car then it means that he is really into you………🌺💕🌺

But if he doesn’t show any of the above-mentioned signs then it means that he just understands you as his friend…..💔

As per me, he is attracted towards you so if you like him then ask him because only he can give you the exact answer what he feels about you…..👍

If you see some other signs of affection⬆️ in him then you can ask him “his name, are you hiding something? Do you think you will be able to hide from me that you love me?”💕💕

Hope, he will then confess that he likes you…..👍🌺

But if you are not into him then just don’t care what he says, just treat him as your normal friend…..🙏🌺

So, this is the end of this post, hope you liked my post and I was able to clear all your doubts about that guy…..🌺

Will see you in a next post, till that take care and stay ahead….