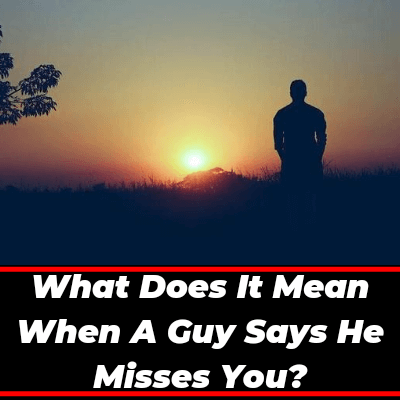 So, a guy told you that he misses you but you are not sure why he said that to you….🌺

Don’t get worried, because through this post I am going to share all the reasons why a guy says he misses you and what does it mean…..🌺

1. He Feels Alone Without You💔

When a guy says he misses you it means that he feels alone without you…….💔

Probably you are thinking that why he feels alone without me?

Well, I have shared answer to this question in second point…..⤵️⤵️

Tell me why would you miss a guy in his absence?

It’s obvious that you will only miss a guy if you love him otherwise why will you miss a guy?

In the same way, if a guy misses you it means he loves you so much…..💕

If you still doubt whether he loves you or not then tell me, why he only said to you that he misses you, why not to any other girl?

3. He Has Been Addicted To You❣️

When a guy says he misses you and he really misses you then it means he has been addicted to you.❣️

He has been addicted to see your beautiful face, hear your nice voice, talk to you, sit near you, etc.

4. He’s Afraid To Tell You That He Really Loves You😍

When a guy says he misses you it means he is telling you the half truth, he is hiding that he really loves you and he’s afraid to confess this in front of you.🌺

If you like this guy then next time when you meet him try to sit near him and ask “do you really miss me” if he again says yes then ask him “then why don’t you say you love me?”❣️

If he really loves you he will confess then but if he doesn’t love you just misses you then he will deny that he loves you….

When a guy misses a girl he really thinks of making her his wife because he knows that she can be with him all the time only when she becomes his wife.

Maybe the guy you are talking about also thinks about marrying you and making you his wife but he is afraid to tell you he wants to marry you.🌺💕🌺

In the same way, when a guy says he misses you it means he can’t stay away from you, it’s very difficult for him to spend a single minute without you.🌺❣️🌺

Tell me, when do we miss someone?

Let me tell you, we miss someone when they are on our mind all the time and we don’t find them near us.

In the same way, he misses you because you are on his mind all the time, and when he doesn’t find you in front of him then he starts to miss you and feel alone.💔

If you have a question like “why am I on his mind all the time?” The answer is because he’s in love with you……💖

When a guy says he misses you it means he wants to spend time with you but he getting shy to ask you out.🌺

If you like this guy then you can tell him “wanna take me out?” whenever he tries share his feelings with you or you can say this to him whenever you see him in his car/ on his bike.🚗

Only say this if you like him, if you don’t like him then just don’t think much about that guy.

Hope you will get positive results……👍👍

9. Check How Many Times He Says This?

Do you think a guy will say he misses you without thinking and to any girl?

No dear, a guy knows very well that by saying I miss you to any girl indirectly he’s saying he’s in love with her.🙏

And trust me, a guy who truly loves you will only say once “I miss you” to you because he knows that if you like him then you will understand in one second that he likes.❣️

If a guy is saying too many times that he misses you, he may be pretending to feel lonely without you.🙏

If he is really into you i.e he truly loves you then while saying he misses you, you will see too much love for you in his eyes & the pain will be visible on his face very easily.😍💕

But if he’s just pretending to love you, then you will not see any pain on his face and if he gets normal or funny after saying he misses you then trust me, he is really a liar, you should keep a safe distance from this guy.

If he is really in love with you then he will make efforts to see a glimpse of your face when he misses you…..🌺

Like he will drive his car by your house multiple times a day to see you, he’ll try to get your phone number, etc.

If he is not making any effort to see you then there is a possibility that he’s lying that he misses you…..🙏

Well, this is the end of this post and I hope my post was able to solve all your doubts about that guy…..

But if you still have doubts then you can contact me through “contact us” page, I will reply you back as soon as possible….