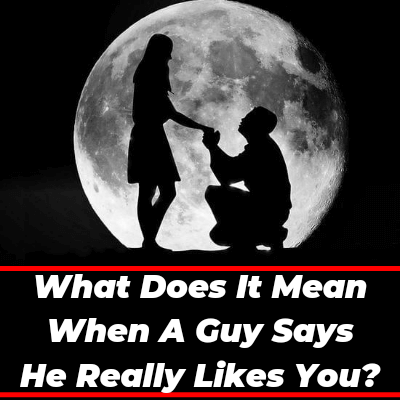 Don’t get worried sister because through this post I am going to share all the reasons why a guy says he really likes you and what does it mean…..✌️🌺

Table of Contents show
1. He Has Become Yours❣️
2. He Has Completely Fallen in Love With You😍
3. He Wants To Marry You👰💒
4. He Likes Everything About You😍
5. He Can’t Live A Second Without You🌺
6. His Love For You Has Come on Its Peak💕
7. He Sees You More Than A Friend💞
8. Was He Nervous, Sad, Shy, or Was His Voice Soft?🌺
9. How He Left You At That Time Really Matters
10. It’s Very Important To Check His Behavior From Tomorrow 🙏
11. Talk To His Best Friend😎
12. Did He Show You Any Signs Of Attraction?
13. What You Can Do Now?

Yes, when a guy says he really likes you then it means that he has become yours and he has surrendered himself to you……🌺💕🌺

I also said my crush that I really like you with tears in my eyes, she wiped off my tears and said that she likes me too, now we both are going to get married soon….

I said I really like u to my crush because I knew that I have become hers, I can’t live without her, my heart & my soul has accepted her, that’s why I told her this..🙏

Trust me, I really love her and can never think about cheating her…..🙏💕

2. He Has Completely Fallen in Love With You😍

When he says i really like you then it means he has completely fallen in love with you and his immense love for you made him to say this to you…..🌺💕🌺

I know you will not believe me that he loves you…..

Tell me, why he said only to you that he really likes you why not to any other girl?

Hope now you have understood that how much he loves you…..👍

I am also a guy, so trust me, a guy only says I really like you to a girl whom he truly loves and wants to marry with her….👰

So by saying you he really likes you, he’s indirectly saying to you that he wants to marry you and make you his wife.💕👰💒

4. He Likes Everything About You😍

The guy you are talking about loves everything about you like the way you smile, the way you look at him, your simplicity, your too much beautiful face, your blue eyes, your silky hair, etc..🌺

5. He Can’t Live A Second Without You🌺

Yes, when a guy says I really like you it means that he can’t live a single second without you….😭💞

That’s why he said to you that he really likes you,so that you can understand his love and come in his life by becoming his wife….👰💒

6. His Love For You Has Come on Its Peak💕

The answer is, a guy confesses only when his love for the girl he really loves comes to its peak i.e when he has completely fallen in love with you…🌺💕🌺

Similarly, he said to you that I really like you because his love for you has reached its peak….😍💖

He’s missing you badly at his house, you are on his mind all the time, he chants your name, his feelings for you have overpowered him, and that’s why he confessed to you….👍

7. He Sees You More Than A Friend💞

If he considered you as a friend then he should not have told you that he really likes you….🌺

But he said this to you that means he sees you more than a friend, maybe as his girlfriend or maybe as his future wife………😍

Facial expressions really matter to know if a guy is really speaking from his heart or just joking….🌺

So, to know if he’s really into you or not, you need to recall what you were seeing on his face when he said that he really likes you…..🙏

If he was looking serious, nervous, shy, his face was looking sad & needy, his eyes were slightly wide, his voice was soft, and the pain of your love was clearly visible on his face then it means he really loves you & every single word he said to you came straight from his heart….. ❣️

But if he was saying freely to you i.e there was no pain and seriousness on his face then it means he’s pretending to like you, never say yes to him, he is not a good guy for you, you should keep a safe distance from him…..🙏🙏

9. How He Left You At That Time Really Matters

I am sure you said nothing to him when he said he really likes you and that’s why you are searching about him on Google…..😎

And as you said nothing so, his style of leaving you at that time can really help us to know if he really loves you or is just pretending…..👍🌺

If he left you silently with a very sad face & looking down, it means he truly loves you, if there were tears in his eyes then it’s really good for you because it shows how much he loves you…..🌺😍🌺

Buy if he left you with no sadness and very normally it means he is just pretending to love you, you should ignore him…..🙏🙏

10. It’s Very Important To Check His Behavior From Tomorrow 🙏

If you said nothing to him then I am sure his behavior is going to change completely from tomorrow…..🌺

If you see the above-mentioned signs in him tomorrow then trust me girl, don’t leave this guy, he is a diamond, and no one can love you more than him..🌺😍🌺

But if he is just pretending to like you then you will find him smiling, behaving very happily with his friends, u won’t see any sadness and fear of you in his eyes…..

If you see the above-mentioned signs in him then please ignore this guy, he is a player and can cheat you anytime… 🙏🙏

If you want to know whether he really likes you or not then you can try talking to his best friend and asking him if his friend really loves you or he’s just pretending……..🙏👍

Because we guys share everything with our best friend, including about the girl we genuinely love…..🌺💞🌺

12. Did He Show You Any Signs Of Attraction?

As from tomorrow, his behavior is going to change completely so we need to analyze his past behavior with you to know if he is really into you or he is just lying…..🌺👍

If he used to get shy around you, you often caught him seeing at you, he always used to talk with you with a cute smile, he used to help you a lot, he was never able to look into your eyes while talking to you then it means he really likes you, you can trust on him….🌺😍🌺

But if he never tried to help you, to make you laugh, he never got shy near you, he never used to talk to you with a smile, that means he is lying to you, you shouldn’t believe him and you should try to stay away from him…..🙏🙏

But if you like him then tell him that you like him back too, he will be really happy to hear this from you…😍💕

You can also ask him to introduce you to his mom & then if he introduces you to his mom then it’s really a good news for you and a good sign that he wants to marry you but if he doesn’t introduces then it means he’s not really into you, and you can think about leaving him……….🙏👍

That’s it for this post, hope you liked my post and I was able to clear all your doubts about the guy you are talking about…..💜

Will see you in a next post, till that take care and stay ahead…..👍