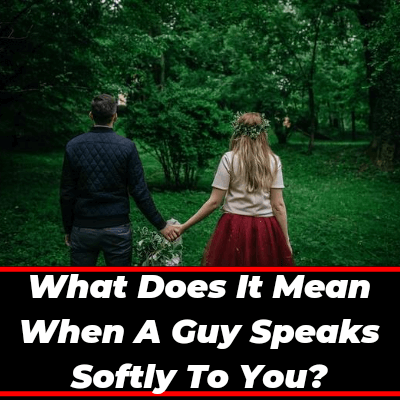 So, a guy speaks softly to you but you are not sure why he speaks in a very soft tone in front of you?🤔

No problem, after reading this post, you will have the answer of your query.👍

Based on that, I am going to share the exact reasons why a guy speaks very softly with you and not with others.⤵️⤵️

Table of Contents show
1. This is His Inner Love Voice💕
2. He is Little Bit Shy To Admit He Wants You
3. He Wants To Make You Feel Comfortable & Safe With Him
4. He Genuinely Loves You
5. You Are Standing/Sitting Very Close To Him💑
6. You Speaks Very Boldly To Him
7. So That No One Can Hear What He is Talking To You
8. He is Doubting His Mouth Breath
9. Most Men Have A Tendency To Speak Softly in Front of a Woman
10. If You Like Him, Try To Ask From Him
FAQ’s

1. This is His Inner Love Voice💕

Do you think a guy will purposely or knowingly try to talk with a soft voice to you?

No, a guy will never try to talk softly with you unless he has feelings for you.

So if a guy speaks softly with you then this shows that he has feelings for you in his heart.💕

When a guy speaks softly to you then this also shows that he respects you too much as his friend or as his love if he loves you(⬅️more chances of this).😎😍

2. He is Little Bit Shy To Admit He Wants You

When I had a crush on a girl, I was never able to tell her that I liked and needed her because I started to automatically get shy in front of her and it stopped me from telling her what was in my heart .

In the same way, he is getting little bit shy to tell you that he wants you and wanna make you his wife.💕

Find him alone, hold his hand and look into his eyes and ask “do you like me?” I am sure, he will tell you how much he loves you then.

3. He Wants To Make You Feel Comfortable & Safe With Him

Since he’s a guy, he knows very well that you won’t feel comfortable or safe when he tries to speak like a man with a heavy voice.

Therefore, he is talking to you very softly so that you can feel comfortable with him and can spend a very long time talking to him.

4. He Genuinely Loves You

As per me, guys who just pretend to love you will speak in a normal tone to you which they use to speak with others.

But the boy you are talking about is a very nice guy who genuinely loves you and that’s why he talks very softly to you to show that he likes you….💕

5. You Are Standing/Sitting Very Close To Him💑

He will talk to you in a normal voice if you are standing/sitting a little away from him.

But if you are standing/sitting very close to him then as he loves you so his voice will automatically get soft even he doesn’t want because a guy can never speak with hard voice tone to a girl who is his life.💕💕

6. You Speaks Very Boldly To Him

If you are speaking very boldly with him and he is little bit shy and have feeling for you then he will not be able to talk with a heavy voice tone to you.

And the reasons behind is that he is shy to you.

7. So That No One Can Hear What He is Talking To You

He wants to keep all the good things he his talking with you between you and him and his friends if they are nearby.

By talking softly to you, he is stopping his and your talks from getting to the ears of others even from the girls who are nearby you and him because love needs to be hidden.😎

8. He is Doubting His Mouth Breath

When you speak with a heavy tone then the air from your mouth travels a long away forward and the other person in front of you can easily smell your mouth breath whether it is good or bad.

But instead, if you speak slowly and with a soft tone then your mouth’s breath travels very less and the human infront of you can smell your breath whether it’s bad or good.

Even though your guy’s mouth breath is very refreshing and nice to inhale but still he is doubting whether his mouth’s breath is good or not because if you are able to smell his breath and if it’s not good then you will not be impressed from him and he knows very well about this.

That’s why he is speaking softly so that you can’t smell his breath despite it’s good.

9. Most Men Have A Tendency To Speak Softly in Front of a Woman

As he is also a man and you are a woman so he is speak with a soft tone to you.💕

But if you like that guy then please try to ask from him that why he speaks so nicely with you, I am sure he will tell you the real answer then.

If he says that he likes you too much then you can also share what’s in your heart for him…..💞💕

#1 What does it mean when a guy talks in a low voice?

It simply means that they respect you a lot and also attracted towards you.💕

#2 What does it mean when a guy talks to you in a baby voice?

When a guy talks to you in a baby voice then it means that he wants to make you laugh and see a cute smile on your face.😎

So, this was my post, hope you liked it & I was able to solve your query.

Take care and have a nice day ahead…..🙏👍