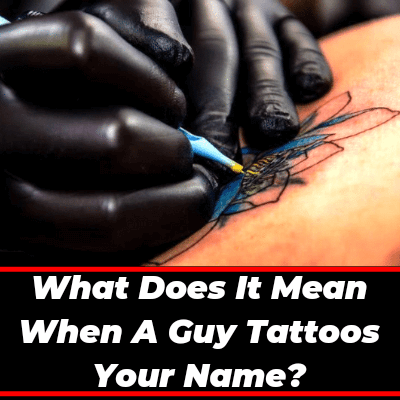 So, you were shocked when you saw a guy who is your friend got your name tattooed on his skin…….🌺

And now, you aren’t sure why he has tattooed your name……

Don’t worry sis because through this post, I am going to share exact reasons why a guy tattoos your name and what does it mean……🌺👍

So, without wasting a single second, let’s get started……⤵️⤵️

Table of Contents show
1. It’s A Sign of Love & Affection💕
2. He’s Trying Hard To Let You Know He Likes You💕
3. It Shows He Can Bear Pain For You But Can’t Hurt You😍
4. He Sees You As His Future Wife❣️
5. It’s A Silent Way of Expressing Feelings😍
6. He Needs To Answer Many🙏
7. You Are Very Important To Him💞
8. He Wants To Feel About You All The Time💗
9. Why Would You Get A Guy’s Name Tattooed?🌺
Now What You Can Do?
Frequently Asked Questions

No one is going to get your name tattooed on their skin unless they like you….🙏

Believe it or not but the guy you are talking about is definitely in love with you…..🌺💕🌺

2. He’s Trying Hard To Let You Know He Likes You💕

Do you think he got the idea to get your name tattooed in a second?

3. It Shows He Can Bear Pain For You But Can’t Hurt You😍

Tattooing is always painful, I’m sure he felt too much pain while getting your name tattooed on skin, so what does it show?

It shows that he can bear pain for you but can’t hurt you, it’s a sign of caring that how much he cares about you…..

You will not find any other guy in your life who would tattoo your name on his skin from himself…..

4. He Sees You As His Future Wife❣️

Do you think, he wasn’t aware that tattoos are permanent?(I know he can remove them but somewhere they are permanent)

If you think he didn’t knew then you are wrong here, because he was aware that if he tattoos your name then it will be permanent on his skin, despite knowing this he got ur name tattooed….🌺

So what does it mean?

It means that he sees you as his future wife, he thinks that you will become his wife and will spend your entire life with him……🌺💞🌺

Maybe the guy you are talking about is shy in nature and he is scared to tell you about his feelings…..

So, he has chosen tattooing your name on his skin to silently tell you that he has feelings for you and he likes you…..♥️

And I think, he is successful to let you know about his feelings…..😎😀

6. He Needs To Answer Many🙏

I know you are nervous about his tattoo but as per me, he is more nervous than you…..🙏

7. You Are Very Important To Him💞

I am also a guy & believe me, a guy gets a girl’s name tattooed only when he really likes her and she has become his life…🌺

If a guy has tattooed your name it means you are very important to him, he doesn’t want to lose you, & he wants to make you his…..💞

8. He Wants To Feel About You All The Time💗

If a guy is really into you then there comes a stage in love where a guy heart asks to do things about the girl he loves like driving by her house, looking at her picture, texting her, asking her out on a date, etc.🌺

All these things makes him feel good from inside….

Tattooing the girl’s name is also a part of this stage…..

So, if a guy has tattooed your names it means whenever he sees your name on his skin it makes him feel good……💖

9. Why Would You Get A Guy’s Name Tattooed?🌺

Yes tell me, why would you get a guy’s name tattooed on your skin?

If you find the answer then that answer will also be the answer of your question “why he tattooed my name?”🌺🙏👍🌺

Now What You Can Do?

Well, there is no doubt left that he likes you and now, it’s all up to you what to do next…..

If you like him then go to him and ask “why you have tattooed my name? Do you love me?” If he says Yes, you can also confess to him that you also like him back…..🌺💞🌺

#1 My Ex Got My Name Tattooed On Him? It means he wants you back and he is telling you this by tattooing ur name, maybe he has realised that you were his real love and he made a mistake by leaving you, wait for some days he will come back…….if you still love him then you can also approach him…..🌺💞🌺

#2 Is It Bad To Get Someone’s Name Tattooed On You? No, It’s not bad but it’s really good, it shows that you really like them, don’t think about what others will say, just go for it……👍👍🌺

#3 Where To Put Boyfriend’s Name Tattoo? According to me, your arm is the best place to put your boyfriend’s name tattoo….👍🌺

#4 Girlfriend Got My Name Tattooed On Her? Congrats brother, this shows that your girlfriend really loves you, & as per me, u should also get your girlfriend’s name tattooed on your skin in return, if everything goes well, propose her and marry her and live a happy life with her then……🌺❣️🌺

#5 My Husband Got My Name Tattooed? That’s really great dear, this shows that ur husband really likes you, trust me, your husband is a genuine guy and there are very less chances that he would cheat you……👍👍

This is the end of this post, hope I was able to clear all your doubts about that guy…….

Will see you in a next post, till that take care and stay ahead……👍👍