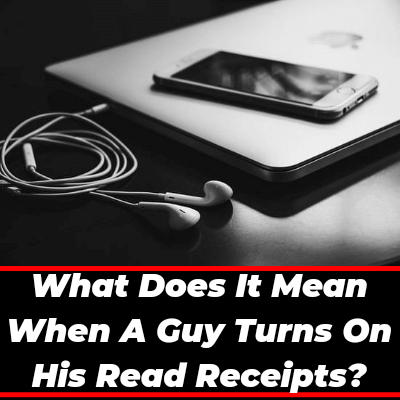 Personally, I prefer guys to keep their read receipts ON because they look more genuine and honest with that….🙏🌺

If a guy who is your friend has turned on his read receipts then there can be many reasons behind it…..🌺

And if you want to know all those reasons then this post is for you because through this post, I am going to share all the reasons why a guy turns on his read receipts and what does it mean…..✌️

So, without further delay, let’s start this post…..⤵️⤵️

Table of Contents show
1. So That You Can Know That He Has Seen Your Message🌺
2. He Cares About You💝
3. He Doesn’t Want You To Feel That He’s Ignoring You💕
4. He Has Become Honest To You🙏
5. He Has Become Fearless 🌺
Is This A Good Sign When A Guy Turns On Read Receipts?

1. So That You Can Know That He Has Seen Your Message🌺

Whenever you text him and his read receipts are off then you will never be able to know whether he saw your message or not if he didn’t reply to your message…..🙏

So, he turned on read receipts so that whenever he reads your message, you can get to know that he has read your message and you don’t feel stressed….💕

And because of this, you won’t be able to spend your day in peace, so to avoid this, he turned on his read receipts….

And this shows that he cares about you and your health and now, you can easily know when he has read your message.💕

3. He Doesn’t Want You To Feel That He’s Ignoring You💕

If you text him and he sees your text but for some reason, he can’t reply for hours and his read receipts are off then you will feel like he is ignoring you because after hours of your text he still hasn’t seen your text…………💔

But in reality, he saw your text but for some reason, he wasn’t able to reply back and you are feeling he’s ignoring your texts, which is just a misunderstanding.💔

So, to avoid this kind of misunderstanding, he turned on his read receipts………👍

4. He Has Become Honest To You🙏

Maybe he thinks that you will feel like he is not honest with you if he keeps his read receipts turned off….💔

5. He Has Become Fearless 🌺

Do you know why most guys turn off read receipts?

Because of fear, yes because of fear a guy can turns off his read receipts like when someone texts him and he saw their text then he starts getting scared that he has to reply them back otherwise they will feel bad & offended…🌺

But when he turns off read receipts he feels safe because now, no one can get to know when he saw their text…🌺

And when a guy turns ON his read receipts then it shows that he has become fearless, he is saying to all that if he wants to reply then he’ll otherwise he won’t….😎

So, the guy you are talking about has become fearless now….❣️

Is This A Good Sign When A Guy Turns On Read Receipts?

Yes, this is really a good sign when a guy turns on his read receipts, he is not like other guys who just hide themselves by simply turning off read receipts……👍🌺

He seems genuine, honest, responsible, and a nice guy to me….

So, it’s a good news for you if he has turned on read receipts, you should be happy about that……….👍❣️🌺