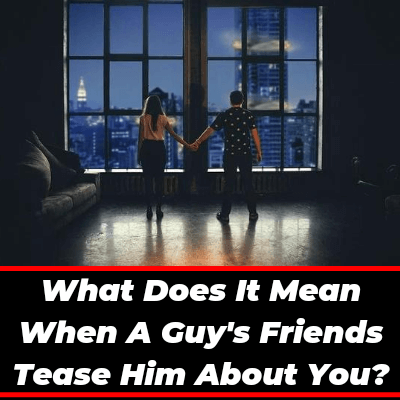 Well there can be many reasons behind why his friends tease him about you and through this post I am going to share all those reasons with you…..

Table of Contents show
1. They Know He Loves You❣️
2. He Has Told Them About You😎
3. It’s Obvious, They Will Tease Him😎
4. They Want To See You Both Together👰💒
5. They All Know You Are His Biggest Weakness😍
6. They Want You To Know That He Likes You💕
7. Ask His Friends😎
8. Does He Get Shy & Becomes Happy?
9. Does He Show You Other Signs of Affection?
10. If You Like Him Then Ask Him😍

1. They Know He Loves You❣️

Trust me, a guy’s friends tease him about a girl only when they know that he likes that girl….😎

So, if his friends are teasing him about you when you are around him then one thing is for sure that they all know that he likes you…..🌺💕🌺

And it’s not a bad thing because we guys tease each other about the girl we like or love…..🙏👍😎

2. He Has Told Them About You😎

Actually my friends also tease me about the girl I love who is my classmate….😎

They tease me because I have told my friends many times that “She is fire bros, she is so much beautiful, one day I will marry her…..”😍💕

Whenever she is near me they start to tease me and even they tell her that I was saying them that she is really beautiful, he likes you, etc.🌺

I feel embarrassed and start blushing and smiling, but it also feels good because somehow she is able to know that I like her……🌺💕🌺

Similarly his friends tease him when you are around him because he has told them about you like you are very beautiful, he likes you, etc….🌺

3. It’s Obvious, They Will Tease Him😎

If his friends know that he likes you then it’s obvious for them to tease him when you are around him because we guys are like this, his friends will try to pull his leg….👍🙏

Even they can tell you while teasing him that what he was saying about you to them…..🌺

So, just enjoy the moment and if you like him then try to see how he blushes when his friends tease him…..💕

4. They Want To See You Both Together👰💒

Although when a guy’s friend tease him around the girl he likes then he feel embarassed but he doesn’t feel angry on them because he knows very well that they as his friends and they all want to see both of them together…..💕💕

Similarly, his friends tease him about you when you are around him because they are helping him by letting you know that he likes you so that they all can see you both together in future as husband & wife…🙏💞

5. They All Know You Are His Biggest Weakness😍

Yes, his friends know very well that you are his biggest weakness and he can’t speak a single word in front of you……💕

And that’s why his friends are enjoying the moment by teasing him about you because they know when it comes to you he can’t speak a word, he will start blushing or start smiling….

I am again saying that this is normal between we guys, it’s a part of our friendship, the guy you are talking about will never get angry on them because he knows that they are his friends and just enjoying the moment by teasing him abt you….👍👍✌️

6. They Want You To Know That He Likes You💕

Probably you are thinking that why his friends want me to know that he likes me?

Because his friends want to see you both together, they want to see him as your husband and you as his wife…..🌺💞🌺

And I am sure, they are able to make you know that he likes you, that’s why you are searching on Google……💕

If you really want to know whether he loves you or not then you can try to ask his friends that what he tells them about you….🙏👍

Rather than asking one friend, I will advise you to ask all those guys who tease him when you find them in a group(make sure only ask when he is not with them)….

You can ask his friends “You guys tease ‘his name’ about me, would you all please tell me what he tells you all about me and does he really love me?”

To know whether he likes you or not, you need to notice his behavior when his friends tease him about you….👍✌️🌺

If he gets sad, silent & doesn’t pay attention to his friends then it means he doesn’t like you…..💔

But if he gets shy, he tells you that his friends are telling lie, and he smiles then it means that he really likes you but is trying to hide it…..🌺💕🌺

9. Does He Show You Other Signs of Affection?

If he gets shy around you, he looks down when you talk to him, he talks with a soft voice to you, he always tries to help you, he tries to get your attention and he also tries to make you laugh then it means he really likes you…..🌺💕🌺

But if he doesn’t show the above mentioned signs of affection, it means he doesn’t like you….💔

If he shows you other signs of affection⬆️ and you are sure he likes you and you also like him then you should try to ask him whether he loves you or not.👍

When and how to ask⤵️

Well when he gets shy in front of you then it’s the best time to ask him…..

You can look into his eyes and ask him “why do you get shy of me? why don’t you say that you love me?”💕

I am sure, he will then tell you what he has in his heart about you and after that, you can also confess to him……👍

That’s it for today, hope you liked my post and I was able to clear all your doubts about that guy……🙏👍

Will see you in a next post till that take care and stay ahead…..