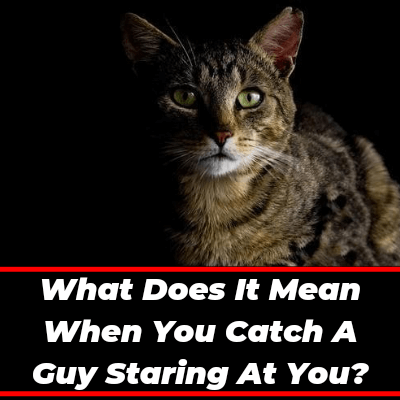 Don’t get worried sister because through this post I am going to share all the reasons why he stares at you and what does it mean…..🌺👍

Along with that, I am also going to share what you can do when you find a guy looking at you, so please don’t skip the post & make sure to read till the end.👍✌️

Table of Contents show
1. He Loves You❣️
2. It Means He is Looking At You When You Are Not Looking 💕
3. You Are Really Pretty😍
4. It Depends Upon How Many Times You Catch Him Staring At You🌺
5. It Depends Upon How He Reacts🌺
6. It Depends On How Long He’s With You
7. It Means Looking At You Make Him Feel Good😍
8. He is Thinking A Lot Of Things About You While Looking At You😎
9. He Wants To See Your Reaction🌺
10. Does He Talk to You?
11. He is Noticing Your Every Gesture & Move👀
12. Why Would You Stare At A Guy?
13. His Overall Behavior With You Really Matters🌺
14. Try To Sit Away From Him
15. What You Can Do?

Like him, I also stare at the girl I genuinely love, she sits infront of me, like she sits on the first bench and I just behind her on the third bench of the same row.😍

Since the teaching board is in the front so I am able to see her very easily all the time without her doubting on me…….🙏❣️

Now, the question arises that why do I see her all the time, or why the guy you are talking about stare at u when you are not looking?

Because I genuinely love her, everytime I see her it makes me feel really good from inside, similarly the guy u are talking abt sees you many times because he loves you or maybe he has a crush on you(in the 6th point I have answered what really it is)🌺

If you still doubt whether he loves you or not then tell me, why he stares only at you why not he stares at any other girl in your class?

I hope now you have understood that he really loves you…..🙏

2. It Means He is Looking At You When You Are Not Looking 💕

And as a guy I can say, he does this because he’s attracted towards you and your beauty……🌺💕🌺

3. You Are Really Pretty😍

He is looking at you very often it means you are really pretty because a guy never look at a girl who is not pretty or beautiful…..🙏

I stares at the girl I love because she is really pretty but it doesn’t mean that I am just attracted towards her complexion but I love everything about her from her voice to her soul…..🙏🌺

4. It Depends Upon How Many Times You Catch Him Staring At You🌺

If you catch him staring at you twice or thrice or more everyday then girl, it means he has become yours, his eyes are not letting him to look away from your beautiful face…..😍

5. It Depends Upon How He Reacts🌺

You can easily find out what he has in his heart about you just by seeing his reaction when you catch him staring at you…..✌️

If he quickly looks away or down when you catch him it means he’s shy, he is afraid and embarrassed that you caught him staring at you, undoubtedly he likes you but he’s afraid to make a move…………🌺💕🌺

If he just keep staring at you and he doesn’t look away when you catch him then it’s a creepy behavior from him and he’s not a good guy….🙏

If he makes eye contact when you catch him looking at you and he breaks eye contact by giving you a smile, it means he’s shy and really loves you, if you like him then you should approach him because he may not approach you first because of shyness……❣️

6. It Depends On How Long He’s With You

To know he has just a crush on you or he loves you, you need to check for how long he’s with you…..🌺

If he’s studying with you from a long time like more than a year ago then it means he is really in love with you…..🌺💕🌺

But if you have just met him like you have become friends with him a month or two ago, it means that he just has a crush on you…🌺❣️🌺

7. It Means Looking At You Make Him Feel Good😍

When i sit behind the girl I love then I can’t stop myself from looking at her because when I look at her face then i feel completed & happy from inside like when I see her, my body do some chemical activity which makes me feel really good.🙏♥️💖

Similarly, the guy you are talking about is looking at you because he is not able to stop himself from looking at you & like me he also feels completed from inside when he sees your face….🌺💕🌺

8. He is Thinking A Lot Of Things About You While Looking At You😎

When a guy stares at a girl he likes then he thinks many things about her, and I am saying this because I also think a lot of things about her when I look at the girl I love…..👍👍

Similarly, the guy you are talking about also thinks a lot of things when he stares at you like “She(you) is very beautiful, her hair are very nice, I need to help her to impress her, don’t know she like me or not, her smile is fire, tomorrow I will say hi to her, etc….”🌺💕🌺

9. He Wants To See Your Reaction🌺

I know you caught him but there is a possibility that he was caught by himself, like he planned that today he will stare at you till you catch him looking at you..🌺

And he wants to be caught by himself because he wants to see your reaction like Will she smile? Will she make eye contact? Will she start a conversation? Will she look away? And many more….

Probably you are thinking why he wants to see my reaction? The answer is, because he likes you…..🙏🌺💕🌺

If he talks to you and often stares at you, it means he likes you but he is not making a move because he thinks that it’s too early, he’s afraid that you will be angry with him, & he thinks you will reject him….🙏♥️

If he studies with you, doesn’t talk with you but stares at you very often, it means he’s shy and afraid to make a move, he thinks that you are angel and you will never accept a guy like him…..🙏♥️

11. He is Noticing Your Every Gesture & Move👀

As I sit behind the girl I love, so I can easily see her what she does in the class all day like I can see her beautiful face when she smiles, when she talks with her friend(girl) who sits near her on the same bench, her silky hair, her nose and eyes…..🌺

Similarly, if the guy you are talking about sits behind you then there is a very high possibility that he notices your every gesture and move when you are not paying attention…..😍

And we guys only notice every movement of a girl when we genuinely like her, so may he has accepted you as his queen🙏👍😍

Yes, try to tell me, why would you stare at a guy very often?🙏

I know your answer will be ‘I will only stare at a guy very often when he is beautiful and handsome, I really like him, and I have completely fallen in love with him’

Now, you can think why the guy you are talking about stares at you…..🌺💕😎🌺

13. His Overall Behavior With You Really Matters🌺

To know if he really likes you, you need to examine his overall behavior with you….🙏

If he gets shy around you, he talks nicely with you, he respects you, he tries hard to help you in any way he can, he always looks at you with a cute smile, and he shows other signs of attraction it means he genuinely likes you and staring at you is the result of his love for you.🌺💕😍🌺

But if he does the opposite of what I have written above, it means it’s a doubtful situation what he has in his heart about you……🙏🌺

Actually this is a test for him, if you want to take you can take it and if not then u can avoid it…..👍

You need to change your sitting position i.e. you need to sit as far away from him as you can in your class.

And if he stares at you again you need to check his facial expressions and especially his eyes because a guy’s eyes can never tell you a lie….🙏

As he knows that you have caught him looking at you, so now if you start sitting away from him then if he really loves you then he will be sad thinking that you don’t like him….🌺

If he stares at you again after you start sitting away from him then try to look at him back, if his face looks a little sad, the pain of your love is clearly visible in his eyes, his face looks like he wants to say something to u and he sits quietly on his bench, that means girl, he has become yours, he genuinely likes you…..🌺💕🌺

But if his facial expressions are normal, he is treating his friends very positively, and there is no sadness on his face then it means that he really doesn’t like you, maybe he is into you but not that much…💔🙏

If you like him and he’s a genuine guy like he’s shy, he’s great at studies, he doesn’t talk with girls except you, most teachers like him, he had no girlfriend in the past and neither in the present i.e you are his first and last love, and you know he will never cheat you then you should try to make eye contact with him when you catch him staring at you…..🌺

If he’s shy of you then you can sit with him in your class, and try to ask him by looking into his eyes “Why you stare at me so often? Why don’t you say you love me?”🌺

I am sure after hearing this from ur mouth, he will tell you how much he’s into you and how much he loves you…..🌺💕🌺

If he is a player i.e he is not genuine and you don’t like him then just simply avoid him and try to sit away from him….🙏🙏

So, this is the end of the post, hope you liked it and I was able to clear all your queries about that guy……👍