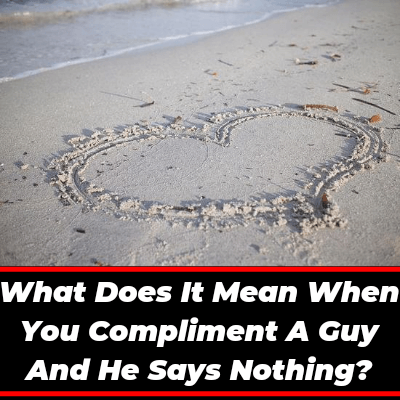 When we compliment someone, we all expect a sweet reply back from them like a cute smile or a simple thanks.

Recently, if you complimented a guy and he said nothing to you then there can be many reasons why he went silent.

It can be very emotionally painful for a girl when she compliments a guy she likes and he says nothing.💔

Through this post, I am going to share the exact reason why he didn’t say anything to you when you complimented him……

Table of Contents show
1. Maybe He’s Shy
2. You Made A Very Heart Touching Compliment 💕
3. He Doesn’t Know If You Love Him & Maybe It’s Your First Compliment
4. You Had A Lot Of Friends Around You
5. Check If He Smiles Or Not
So, What To Do Now?

Trust me, a shy guy very rarely responds to compliments, especially compliments from a girl he likes.🌺

So, there’s a possibility that the guy you are talking about is little shy and that’s why he said nothing when you admired him.

Does he likes you or not?

If you are sure that he gets shy around you then chances are he likes you whether he responds or not when you compliment him.💕

But if he isn’t shy in front of you and still doesn’t say anything when you praise him, it’s more likely he doesn’t like you.💔

2. You Made A Very Heart Touching Compliment 💕

Some compliments are normal i.e. they are the type of compliments that don’t touch your heart like your hair looks good, this compliment won’t stir up your feelings much.

But some compliments are very strong i.e they directly touch your heart like if I say, you are looking too much beautiful, this compliment will directly ignite your emotions and probably you won’t be able to reply back due to the strong impact of this compliment.

In the same way, if you are giving a very romantic compliment to a guy and he likes you then trust me, he won’t be able to answer anything because your words have gone straight to his heart making him a little shy and silent.🌺💕🌺

3. He Doesn’t Know If You Love Him & Maybe It’s Your First Compliment

The first compliment can make one wonder why someone else is praising them.

Solution: If you like this guy and you are sure he secretly likes you then go and confess to him that you love him, everything will be fine then.

4. You Had A Lot Of Friends Around You

If you are complimenting him when you have many friends(ofcourse girls) around, trust me, a genuine guy will never say anything in return, not even thanks because there are so many girls around you, again making him shy to say anything.

Solution: Next time try to compliment him in alone, this will increase chances to many extents that he will say something to you.

5. Check If He Smiles Or Not

He didn’t say anything but did you see if he smiled when you complimented him?

If he gave a cute smile then undoubtedly he’s into you because a smile means a lot from a guy as it shows affection towards you.💕

But if he didn’t smiled then it’s a doubtful situation if he is interested in you or not.

Please don’t make assumptions that he doesn’t likes you if he didn’t say anything when you complimented him.🙏

Now, what to do when he says nothing?

As a guy, I would recommend that if you like him try to impress him for a few days after that make another compliment about his face like you look so much beautiful, if he doesn’t say anything again.

Then go to him, hold his hand, see in his eyes and ask “I am trying to impress you from a long time and you are not saying anything, don’t you love me?”

If he says “I don’t love you” then leave that guy because you have tried your best to impress him, now, if he doesn’t like you then it’s better to leave him.

Hope I was able to clear your all doubts, this is the end of this post, hope you liked it……🙏

If you have any query then you can ask me through “contact us” page, I will reply you or write a post on it…..

Till that take care and have a great day ahead…..🌺💕🌺