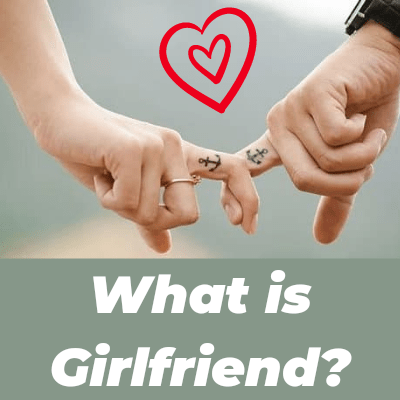 A girlfriend is a female friend of a young boy whom he likes, adores, & considers as his life partner.

Usually, this is not a short-term relationship and if all goes well between the two, then both the male and female can also marry each other.

Today, I will try to clear all the doubts about the word ‘girlfriend’.

So, without wasting your time let’s get started……❤️

1. Do Both The Boy and The Girl Hide Everything From Their Families

It depends upon their family, if their family allows a girlfriend or boyfriend then undoubtedly that boy or girl will not hide anything from their parents.

2. What Is The Meaning Of Ex Girlfriend?

An ex-girlfriend is referred to as the previous girlfriend of a person with whom he is no longer in a relationship.

For example, if you had a girlfriend during your college days, but now she is another guy’s girlfriend, then for you she will be your ex-girlfriend who is not currently in a relationship with you.

3. What Does It Mean To Be A Girlfriend?

Mostly boys have male friends so, to be a girlfriend means that you are a guy’s female friend.

Imp: A forest looks beautiful from the outside but in reality, that forest is very dangerous from the inside, & the same rule applies in your life i.e a good looking guy can’t always be good at heart, so before becoming someone’s girlfriend make sure to double-check that guy because everyone has two faces these days, you only see one face, the other is still hidden from you and that face can be good or bad.

4. What Does Gf Mean In Texting?

Gf is an abbreviation of the word ‘girlfriend’, no matter one is using ‘gf’ during texting or talking, his/her meaning through this word will be ‘girlfriend’.

So, if the next time you hear or see the word ‘gf’ don’t be confused as to what this word means.

5. What Is A Real Girlfriend?

A real girlfriend is a girlfriend who is true to her boyfriend and also has the characteristics listed below:

1. She will never cheat her boyfriend.

2. She will be the first to talk with her boyfriend in his good & bad days.

3. She will never say anything bad about her boyfriend.

4. She will try to look most beautiful to attract her boyfriend.

5. She will always compliment her boyfriend.

Like this, there are many other characteristics of a real girlfriend which we will look at in any other post.

Now, let’s take a look at the real question…..

Should You Make A Girlfriend?

When you start getting young, a question will come in your mind that ‘Should I have a girlfriend? ‘

And the answer of this question depends upon many factors like:

If everything is fine with you like your age, financial condition, etc. then you can think about having a girlfriend.

That’s it for today’s post friend, hope you have understand everything about the word ‘ girlfriend ‘.

Take care and have a nice day ahead….❤️