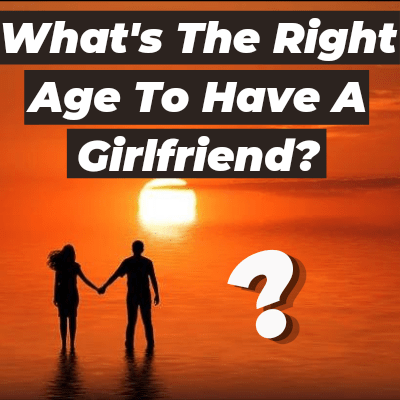 Are you attracted to a girl and you want her to be your girlfriend but you are not sure whether your current age is right for a girlfriend or not?

If yes, then make sure to read this post from here to the end so that you can get the correct answer to your question with logic.

A man can fall in love at any age as it depends on his ability that how much he knows about the words girlfriend, boyfriend, crush, love, affection, etc.

For example, there are two boys named X and Y, X is 15 and Y is 20, X knows everything about love and girlfriend while Y doesn’t know much about these.

Therefore, there is a high probability that X, despite being younger than Y, will be more interested in having a girlfriend than Y at an early age.

From the above example, you can easily understand that the desire to have a girlfriend can develop at any time & at any age of life.

But, to start a new relationship with anyone, you need to be at the right age so that you can understand the value of that relationship.

Let’s get on the point without wasting your single second…….👍

Table of Contents hide
What’s The Right Age To Have A Girlfriend
1. You Look Young & Attractive Between 18 To 30
2. You Can Only Find Your Perfect Partner Between 18 To 30
3. You Have Most Feelings During The Age of 18 to 30
4. Her Parents Will Neither Like a Kid or an Aged Guy
5. You Can Understand The Value Of Money Only When You Are Above 18
Final Words

What’s The Right Age To Have A Girlfriend

18 to 30 is the right age to have a girlfriend because of the following reasons:

But after 18, you start looking more attractive and as a young man, so having a girlfriend after 18 makes more sense.

As per me, a guy looks handsome & attractive till 30, after that he starts to look little bit aged guy which means very few girls will be interested in him.

2. You Can Only Find Your Perfect Partner Between 18 To 30

As we age, new boys and girls start coming into our lives. For example, a boy is 16 years old in 10th grade and he has a girlfriend, now after 10th he goes somewhere else for high school or college, no doubt, here also he will see many girls and maybe he may start liking one of them but in the meantime, he has to forget about his previous girlfriend which can be difficult for him and his ex-girlfriend will also suffer while forgetting him.

Here, he and his ex both suffered but if he had not made girlfriends at a young age, he could have avoided this pain.

So, it make sense that age above 18 is the right age to have a girlfriend.

You can’t expect any feeling for a girl from a small kid because he is unaware of these things and his age is very small to know about these things.

But, when it comes to a young guy who is 18+ then you can say he has feelings for girls and this is the main thing and it’s better to make a girlfriend when you are above 18 so that you can feel those feelings.

4. Her Parents Will Neither Like a Kid or an Aged Guy

A girl’s parents prefer a guy who is young and smart, not who is a kid or aged, and trust me, a boy starts looking young and smart by 18 to 30, so one should think about making a girlfriend only when he is above 18 or below 30.

Age is one of the most important factor which every looks while marrying their daughter.

5. You Can Understand The Value Of Money Only When You Are Above 18

We cannot deny the importance of money in our life and believe me, if you have less money then you will face many problems while making a girlfriend because most of the girls like rich boys.

And you can understand the value of money only at the age of 18 because when you see that rich people are enjoying their life and girls are also attracted towards them then you will know the real value of money and you will try to earn money so that you can have a better life ahead with a beautiful life partner.

Above mentioned points are only applicable until you don’t get true love, once you have true love then age doesn’t matter.

I myself used to like a girl at the age of sixteen and I still like her because she was my true love, but sad truth is, I was not able to tell her about my feeling because I was not a rich guy!

Till that take care and have a nice day ahead…… 👍