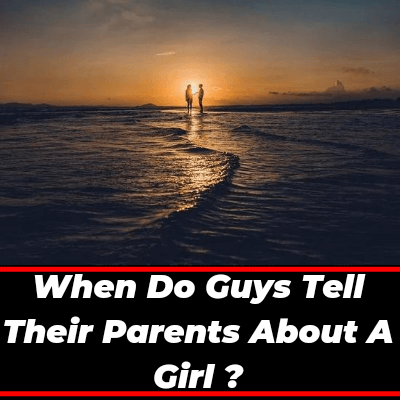 If you love a guy and he also loves you back then one day you will have a question in your mind that “when will he tell his parents about me?”.🌺

If you don’t know the answer then don’t get worried because through this post, I am going to tell you the exact answer about, when does a guy tell his parents about the girl he loves?….. 🌺💕🌺

So, without wasting a single second, let’s get started……⤵️⤵️

Table of Contents show
1. When He Finds That He Has Completely Fallen in Love With Her💕
2. When The Girl Asks Him To Talk With His Parents ✌️
3. A Cheater Will Never Tell🙏💔
4. When His Heart Continuously Say Him “Marry Her Fast”
5. When He Can’t Stay A Minute Without Her😍
6. When He Becomes 100% Sure That She Also Likes Him💞
7. When His Parents Find That Their Son is Talking With A Girl😎
8. When He Finds That He is Of Age To Get Married👰💒
9. When A Guy Starts To Make Some Money on His Own😍
10. Everyone’s Life is Different

1. When He Finds That He Has Completely Fallen in Love With Her💕

Trust me, a guy will not tell his parents about a girl only if he finds her beautiful or he has just started falling in love with that girl.

A guy will only tell his mom & dad about a girl he likes when he finds that he has completely fallen in love with her and she has become his life.❣️🙏👍

2. When The Girl Asks Him To Talk With His Parents ✌️

Yes, if a girl tells a guy (whom she loves) to talk to his parents about her then also a guy can tell his mom and dad about that girl.✌️

But at the end of the day, it totally depends on a guy whether he talks with his mom & dad about her or not.🙏

3. A Cheater Will Never Tell🙏💔

Trust me sis, a guy who is cheating on a girl will never tell his parents about that girl because he is a cheater and he keeps moving on from one girl to another, he won’t tell anything to his mom and dad about any girl!!🙏💔

I really feel sad that there are so many guys like this available in this world and their number can go into millions.

So, make sure your guy is a genuine guy before moving ahead with him.🙏👍

4. When His Heart Continuously Say Him “Marry Her Fast”

Trust me, when a guy truly falls in love with a girl then his heart and entire body starts insisting on marrying her.🌺💕🌺

And after that when he feels the need to marry her then he won’t wait for a second to tell his parents about his love.❣️

If everything goes well then we are able to see a lovely couple who are made for each other only.💞❣️

5. When He Can’t Stay A Minute Without Her😍

When a guy can’t stay minute without the girl he loves then he tells his mom and dad about her that how much he loves her.❤️

So that, they can make his marriage possible with that girl, by talking with her parents.✌️🙏

A guy will not talk about the girl he likes to anyone until he doesn’t know that she also likes him back.🌺

Because for a guy, there is no benefit in telling parents about a girl he likes if he isn’t sure whether she likes him back or not.

So, when a guy becomes 100% sure that she also likes him then he tells his mom and dad about her.👍👍

7. When His Parents Find That Their Son is Talking With A Girl😎

Yes, this is the moment when a guy has to tell his parents about the girl he is in love with.🌺💞🌺

When a guy’s mom and dad catch him talking, chatting, or meeting outside a girl then they ask him about who she is.

And at this moment, a guy tells everything about that girl to his mom and dad.👍😎❣️

8. When He Finds That He is Of Age To Get Married👰💒

You can’t expect a 17 or 18 year old teenage guy to tell his parents about a girl because at this age, he’s just a kid who doesn’t know much about marriage.🙏

But when a boy covers the age of 22-23 or above then he & his body starts feeling the need to get married because he comes to know that he has reached the age where a boy can get married.

And at this point, if a girl is in his life and he really loves that girl then here, he tells his parents about her and also tells that he wants to get married with her.🌺💕🌺

9. When A Guy Starts To Make Some Money on His Own😍

This type of guy is very truthful and he knows very well that money is very important to meet the needs of the girl he loves, so he first focuses on developing monthly income source and when he starts earning money on a consistent basis.

Then he tell his parents that he is in love with a girl and wants to marry her.

Everyone’s life is different and every guy is different, so there’s no exact answer when does a guy tell his parents about a girl.🙏

But a guy who loves a girl and his love for her is really true i.e there is no other girl in his mind other than the girl he loves and no will be, it can take sometime but one day this guy will tell his mom and dad about that girl how much he loves her and wants to marry her.🌺😍🌺

And guys who are cheaters they never tell their mom and dad about any girl….. You should keep a safe distance from these type of guys and also from those guys who have lots of female friends……..🙏👍

Will see you in next post till that stay connected…..👍👍