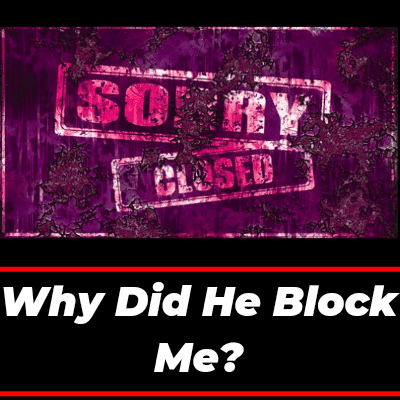 So, he blocked you and now, you want to know the reason why he closed his doors for you…..🔒🚪

Don’t get worried sis because through this post I am going to share 14 reasons why did he block you & with solutions…..👍

So, without wasting time let’s get started…….⤵️⤵️

1. He Wants You To Chase Him

Yes, if he has blocked you because of a very minor argument between you and him then it means he wants you to chase him.🌺

By blocking you he thinks that you will beg him to unblock you or you will apologize to him even if it wasn’t your fault.

Do you think he still loves you or really loved you?

No dear, he doesn’t love you because a guy who genuinely loves a girl NEVER blocks her no matter how bad she does to him.

I also love a girl and trust me, I will never block her in my entire life because she is my life, I wait for her texts, and I really love her.

So, please try to understand he doesn’t love you, if he says he loves you, he is just pretending and taking advantage of your innocence……💔

Solution: Leave him because you don’t need a fake guy like him in your life….🙏👍

Question: Will a guy block you if he likes you?

If a guy really likes you then he will never block you under any circumstances….👍👍

Yes, you may have made a mistake while judging him but in reality he is rude and doesn’t respect you.💔

Only rude guys block a girl after any argument or anything else, real guys never block a girl.

And if he respects you then he would have never blocked you but he closed his doors it means he doesn’t respect you and doesn’t care about you and your feelings…..💔

Solution: Leave him and try to find a guy who is not rude to you and respects you everytime he sees you…..👍👍

Let’s say, you get an emergency, no one is there to help you and then you decide to message him to get help, and when you tried to message him, you find that he has blocked u…… So, what does it mean?

It means he doesn’t care about you, no matter what happens to you or what you do…..

Solution: If he doesn’t care about you then why you care about him? Leave him and start a new life…..👍👍

Maybe he used to talk or text you a lot but currently he is not interested in you that’s why he has blocked you.💔

You chat or talk to a guy because you are interested in him but when you block someone it means that you are no longer interested in that guy…..👍

Solution: If he’s not interested in you then why you are showing interest in him? Is he the only guy on this earth? No? Then find someone else who is genuine and really into you….👍💕

It’s quite obvious that when we are angry on someone then we avoid talking to them and if our anger gets on peak then we block that person.

So, if he blocked you it means somewhere he is angry on you….

If it’s your fault like he saw you with someone else then dear it’s not his mistake, he did everything right by blocking you.🙏

But it’s not your fault yet he blocked you then he is not the guy whom God has made for you…..🙏

I know it’s difficult to find this type of guy but it’s only difficult not impossible…..🙏👍💕😎

7. He Thinks You Aren’t Strong💔

Maybe he thinks that you are weak and when he will block you then you won’t be able to live alone without talking or chatting with him, and in the end, you will beg him to unblock you or to talk to you like before.💔

And i think he is right, you have been trapped in his plan that’s why you are so stressed about why he blocked you, somewhere you are showing that you are weak…..

Solution: Don’t try to contact him back & I would say just ignore him and block him like he blocked you, and start a new chapter of your life…….👍💕

8. He Doesn’t Need You/He is Already With Someone Else💔

If a guy blocks you it simply means he doesn’t need you, maybe you have given him what he wants or maybe he was already in a relationship and you were his side chick.💔

If this is the reality then please leave him because he is already with someone, he is not a good guy because he is cheating on you and the other woman at the same time.

Solution: Always start friendship with a guy who is single and genuine…..🙏👍

Do you think, he didn’t know what he was doing by blocking you or was he not aware that it will hurt you emotionally when he blocks you?💔

No dear, he was aware of this, he has closed his doors for you without worrying about how much pain his blocking will give you…..

Solution: Forget him and move on…..🙏👍

So, try to find out whether it was your fault or his…..🙏👍

11. A Recent Argument Between You & Him

So, if you and he had an argument recently then this could be the reason why he has blocked you…..

Solution: If you were responsible for the argument then find apologies from him but if he was wrong and then also he blocked you it means you were with a wrong guy, better to leave him…..🙏👍🌺

12. Tell Me, Why Would You Block Someone?

Yes, please try to tell me, why would you block a guy?🌺

If you have an answer, then your answer is the answer of your question why did he block you……🙏👍

13. Don’t Start Begging To Unblock You🙏

I know your heart will tell you to go to him and beg him to unblock you but trust me, by doing this, you will lose and he will win….🌺

I know you are not a weak girl, just forget him, he was your past and because of this you are ruining your present and future…

Solution: Find a guy who is single, genuine, good looking, a little rich, and who really likes you i.e. he can never think of hurting you or cheating on you…….🌺💕

14. What Are You Waiting For? Just Move On Dear🏁

If you still think that he is a good guy and really loves you then keep on thinking, I have no issue, but then don’t regret when u find he is cheating on you or he is already spending time with someone else besides you……

According to me, now, you need to block him on all social media platforms and you should try to move on, maybe you will find a very nice guy very soon…..🌺💕🌺

Hope you will understand what I am trying to tell you, I wish God will do everything okay in your life…… All the best…..🙏👍👍

This is the end of this post, hope you liked my post and I was able to give you a clear cut answer what to do now after he has blocked you….

Will see you in next post, till that take care and stay ahead……🌺✌️🌺