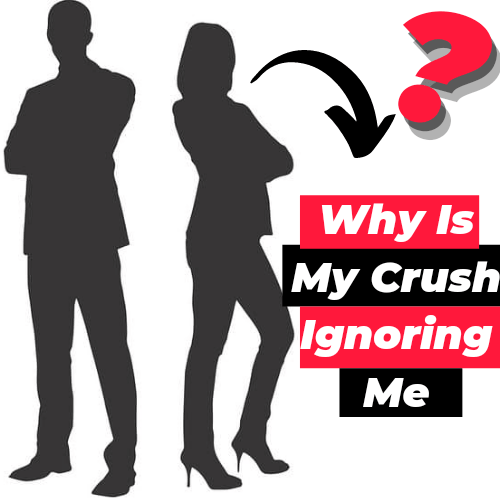 It is emotionally painful for a girl when her crush starts to ignore her in school.

There can be multiple reasons, sometimes he avoids you for your goodness & sometimes because of his personal issues.

In today’s post, we are going to see in-depth reasons that why he ignores you?

28 Reasons Why is Your Crush Ignoring You

I have shortlisted these reasons based on my experience in my school, when I had a crush on someone:

This is the first and most common reason which makes him ignore you.

If he has a crush on someone else definitely he will not try to make any relations with you.

Also, if his crush is in your class & she is continuously seeing that what he is doing, then also he will try to avoid you because of fear of what his crush will say.

Many boys don’t value the feelings of girls and they think that they are supreme every girl likes them.

If your crush is like one of those who has a lot of ego and rudeness then he will always try to ignore you because he has never truly like you.

He really cares about you but he is poor and thinks that he hasn’t any expensive vehicles, his parents work hard day and night, then how he will be able to give a good and smooth life to you.

Despite he truly likes you but he thinks that someone else who is richer than him will be better for you so that you can get a good life full of luxury.

He will try to forget you and break every relation with you by going against his heart, which will be very hard for him.

Some guys are shy and they are not able to behave comfortably with girls.

Maybe he likes you a lot but as he is shy so he is not able to see you directly face to face.

5. Beauty can be a Reason

Like girls, beauty also matters to boys, they also want to look beautiful so that girls can pay attention to them.

Maybe he is thinking that he is not beautiful like other boys and his crush(you) also don’t like his face.

In this situation, you need to tell him that you like him & his face as well.

6. He is Not Sure About You

This is possible that he likes you but he is not sure that you love him or not and because of this he is avoiding you.

To make him sure that you feel the same for him, you can give good facial expressions or can directly tell him via offline or online ways.

Any relation can’t be untouched from fighting between each other, you need to remember that did you and he recently debated on any matter?

If yes, then there is a high possibility that he is angry with you & that’s why going away from you.

To solve this, you both can sit together and discuss moving ahead by bringing peace and happiness to your relation.

8. He wants To see You Grow

Every girl has a dream to become something in life and he also wants to see you achieving your dreams.

He is not like other guys who are only wandering near you because you are beautiful but he also thinks about your future.

Maybe he wants that once you both become successful in achieving your dreams then you both will establish relations.

9. May be His Best Friend Likes You

Yes, this is possible that his best friend has a crush on you & as a ally he don’t want to snatch his friend’s happiness.

In this, your crush has very good thoughts and if you don’t like his friend but like him, then you can say this to your crush and his friend as well.

10. He Thinks He Is Not The Kind Of A Guy Which You Like

No one can assure himself that what kind of guy you like without asking you & that’s why there is a possibility that he thinks that he is not fit for you.

If he is ignoring you with calm facial expressions then this is a sign that he is in doubt about your choice.

11. Someone is Already in His Life

You cannot surely say that no one else is available in his life because you only see him in school, you don’t know what he does at his home and who are his online friends on social media.

If you finds that he is already in relation with another girl, then you can completely stop thinking about this boy.

Many people wear old school type dresses which make them odd among other people.

If you are one of them who doesn’t take care of her body, hair, & dressing then your crush can ignore you.

So, to look good, start to get well dressed & comb your hair nicely before going to school.

13. You are Not Connecting With Him

There are many ways through which a person can establish contact with another person.

You only meet him in school, which as per him is not quite enough, he wants that his crush should also be connected with him via phone call, social media, & offline as well.

If are not connecting with him via the above-mentioned ways then also he can be unhappy with you.

14. You Took Advantage & made fun of Him

Try to remember that, did you and your friends laugh at him on his personality or anything else.

If yes, then this ignorance towards you is the result of his anger because he thinks that you are just doing drama of having a crush on him.

This was just an example but please try to not take advantage of him.

15. You are Not Good at Studies

If you are the kind of girl on which teachers always shout because you never complete her homework & never learns anything.

16. Your Friends Group is Bad

It is possible that your crush doesn’t like your friend’s group because he is concerned about you a lot.

Maybe, he is not able to directly tell you but he always feels bad when he sees you with those friends.

So, try to be with good students who are intelligent, well mannered, & funny as well.

17. You are Not True With This Relation

How it will feel when your crush starts to focus on other girls available in the class?

No doubt you will feel bad and the same applies to your crush.

When he sees that his crush(you) is talking very sweetly with other boys or giving more time to other boys than him, then he will think that she is a bad girl.

And as a result he will start to avoid you.

18. You Never Invited Him in House Programs

When I had a crush on one of my friend, I always have a desire that when will my crush call me at her birthday party or any house program but she never invited me. 😑

If there is a function in your house and your crush knows about this but you didn’t give an invitation to him, then he will think that she(you) doesn’t care about him.

And he can start to ignore you.

If you gave the invitation, then his & your family can know very well about each other & maybe one day they will be agreed on thinking about your and his wedding. 🤝

There is no doubt that you have a real crush on him but have you ever thought that he sees you as his friend or as a lover?

Maybe he always thinks of you as his normal friend and not as his crush.

To clear this unsureness, you need to talk with him on this matter.

There are many friends available in your school who are jealous of you.

One of these has said misleading things to your crush which has made your crush angry at you.

If you have a doubt on anyone then you can keep an eye on him/her or you can directly ask him/her.

21. You Never Helped Him in School

Your crush expects some kind of help from his girlfriend and sometimes he has asked for help but you denied, this makes him feel frustrated and he finds ignoring you as the best option.

Let’s say, your crush has forgotten his pens in the house and no one is giving him a pen and he is urging you as well, but instead of providing a pen, you are laughing & making fun of his helplessness, then this feels bad to the heart.

22. He is Fearful About His Family

Maybe your Crush’s family is too much strict and their main focus is to make your crush study a lot so that he can get a good job.

He fears from his parents that what they will say after hearing about your & his relation.

No doubt, he likes you a lot but to avoid this kind of situation he finds it better to ignore you so that you can start to forget about him & be able to focus on your studies.

23. He Knows The Reality of This Relation

Both boys and girls have a crush on each other mostly in school life but we all know that when we complete our studies things start to change drastically.

So, this beautiful life is for a limited period, after this, some have for higher studies, some have to look after their family business, & some have to do hard work to make daily wages.

Maybe your crush knows about this in advance and for this reason, he is avoiding you as well so that you can secure your future.

In this situation, you both need to discuss about your financial plans so that you both can find the best possible ways to be one in the future.

24. He Wants to Quit This Relation

Maybe you both like each other but due to some unexpected issues, your crush can quit this relation.

For example, he is going to another school, his teachers have advised him to focus on studies not on relations, & more.

25. You Have Ignored Him

Once I send best wishes to my crush on Christmas but after seeing my message she didn’t reply.

So, as per you what this shows? She didn’t reply because she doesn’t like me and I also understood this and after that, I never talked to that girl.

Try to remember that did your crush has messaged you and you didn’t reply?

If yes, then this is a possible reason why your crush is ignoring you.

26. You Never Showed Your Crush To Him

You have a crush on him but have you ever showed your crush by saying happy birthday on his birthday day, good morning & good evening, how are you?, Bye, etc.

If ‘no’ then tell me what else he will do rather than ignoring you?

Some boys have bigger goals of proving themselves to people that they exist here on their own by doing a lot of hard work.

For these boys love, relations, crush, boyfriend, girlfriend, etc. have no space in their heart and mind because they don’t want to get in these things.

If your crush is one of these, then he will try to avoid you.

But still you can speak with him on this.

I have mentioned 27 reasons but still, some reasons are unknown, and to find the exact reason you need to ask your crush that why he is ignoring you?

He will tell you the right reason.

If you think I have left something then let me know by commenting below.

Thanks👍 Have a Nice Day….